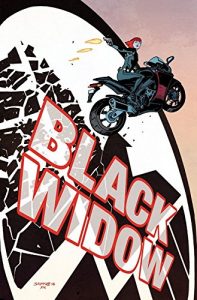 I spy with my little eye, the Marvel Universe’s most efficient and deadly espionage operative in a nerve tingling tale of multiple double cross, secrecy, blackmail and the kind of bone snapping, blood soaked action and combat that’ll make your eyes pop out of your head while muttering “Hot damn…” under your breath.  On a list of things that you never want to do unless you’ve got a death wish, number three is “Don’t back the Black Widow into a corner and put her in a position where she has absolutely nothing to lose”, but I guess the villain of the hour, Platch Liev (the Weeping Lion) missed that particular memo, as in S.H.I.E.L.D.’s Most Wanted that’s exactly what he does to Natasha Romanova in an attempt to coerce her into working for him. As plans go, on the surface, it looks like he’s got all the bases covered and controls all of the cards on the table as he threatens to expose some of the Widow’s more dubious past actions to the world at large unless she does as he requests. But Natasha has been doing what she does for a very long time, and she’s very, very good at it. She’s always at her most dangerous when she appears weakest, and in an explosive international game of cat and mouse, with both S.H.I.E.L.D. and Platch Liev, she’s forced to go rogue, revisit her past and betray everything she knows in order to fight back against her newest foe in an effort to prevent her history from destroying her future.

Waid and Samnee’s story stomps its foot down hard on the accelerator at the end of the books first page and doesn’t let up until the final panel of the last page, as the Widow burns her bridges while doing what she does best, taking the fight to the enemy. Taught, tight, blisteringly quick and with a plot that captures the best elements of sixties and seventies cold war thrillers, S.H.I.E.L.D.’s Most Wanted is as reliant on its striking, detailed artwork as its effervescent dialogue to tell the story of the Widow going off reservation and doing things her way.  In a world that’s riddled with super heroes, it’s nice to see the premier super spy taking the lead in a tale that not only sees her at her fiery, controlled best, but also explores and expands upon her early life as a highly trained Soviet killing machine, which adds further depth and texture to her ever expanding mythology. Welcome to the Widow’s lair… Tim Cundle