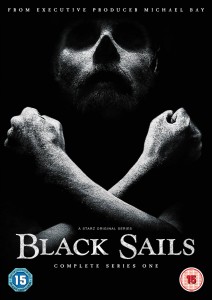 Black Sails: Series One (Anchor Bay)
Terror on the high seas and a life of adventure has, for generations, set the hearts and minds of children big and small, on fire. At some point in life, doubtless inspired by the most famous work of Robert Louis Stevenson (and, if you’re slightly younger, a certain film franchise starring Johnny Depp), everyone has dreamt of being a pirate, and of finding buried treasure, looting, pillaging, fighting authority and living a carefree existence beholden to no-one but their ship mates and captain. Aye, the life of a pirate has always had a certain charm and appeal and no mistake, and that me hearties, is one of the many reasons why ‘Black Sails’, from the minute it begins until the final titles of the last episode begin to roll, is compulsive, enthralling and thoroughly entertaining viewing.

Set halfway through the second decade of the eighteenth century in Nassau during the final years of the golden age of piracy, ‘Black Sails’ combines the fictional and factual (characters and events) to create a unique, bloody, brutal, intriguing, irresistible and compelling story that digs it’s hook deep during the opening episode and tightens its grip with each successive chapter. Ostensibly about (Captain) James Flint’s obsession with tracking, finding and taking the largest shipment of Spanish gold to have ever been sent anywhere by ship, the cargo of the fabled Urca de Lima, ‘Black Sails’ soon unfurls to explore the lives of the people who inhabit his world; Flint’s secret mistress, his fellow pirates, the traders and people who keep New Providence Island in business, and how his quest impacts and affects each of them. As his crusade gains momentum, and his goal appears to be within his grasp, the plot splinters as his allies and foes –each with their own agenda – share centre stage with the central anti-hero. It’s stark, savage, at times ferocious and horribly violent, but it also possess strange warmth and weaves an incredible, and thoroughly addictive, tale throughout its eight episodes, and with an ending that leaves you yearning for the next series to begin, ‘Black Sails’ is the closest you’ll get to living the real pirate life without having to leave the comfort of your own living room. And, like I’ve already said, everybody at some point in their lives has wanted to be a pirate, so maybe it’s time to indulge that fantasy and set sail with James Flint and his crew of scoundrels and villains. Yo ho, yo ho, a pirates life for me… Tim Mass Movement