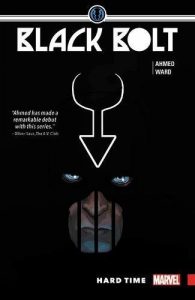 When the Inhumans build a prison, they not only make it escape proof, they also build it to last. So when Black Bolt wakes to find himself locked, and made a prisoner, in the deepest, darkest secret that his ever people ever constructed, he has to piece together how and why he ended up there and attempt to do the impossible. Breakout of a gaol that has stood firm against every attempt to do so for centuries. Tortured, subjugated, stripped of his powers and pushed beyond the limits of inhuman endurance, the former King of the Kree descendants encounters his most fearsome foe, the warden of the building that he’s caged in. The ruler of the domain in which Black Bolt is trapped, is an all-powerful  being who is so single-minded and focussed on his duties that none have ever faced him and lived to tell the tale He is the impassable wall that all roads in the prison lead to and the thing that ultimately stands between Black Bolt, his freedom and his way home. Abandoned, forgotten and left to die, his only chance of success lies in forging alliances with his fellow convicts, individuals who before he was incarcerated, he would never have  even deigned to acknowledge, and mounting an all-out assault on the institution in which he’s imprisoned and its guardian.

Saladin Ahmed’s story is one of redemption and self-discovery as the cast down, dethroned monarch slowly begins to understand who he is, why he is where he is, what he must do and who he must become if he ever wants to taste freedom again. It’s the tale of man who realises that he’s spent his entire life in one form of prison or another, enslaved to the will of his parents and people and his own sense of expectation and the rules he’s imposed on himself in order to fully embrace the role destiny thrust on him. Removed from all that he has ever known, he learns to empathize and sympathise with those around him and slowly realises, listening to the stories of his fellow inmates, that people are forged by experience and their surroundings and that friendship, goodness and mercy are often found in the most unforeseen and unanticipated circumstances and places. Hard Time is so much more than a superhero story. It’s an examination of the human* condition and the factors that shape character and how adversity can, in some strange and extreme cases, be a boon. Coupled with the dark, haunting and mysterious art of Christian War and Frazer Irving, Ahmed has crafted a tale that lays bare the souls of the men and women behind the super powers, shows them at their worst and very best and reinforces the point that at the end of the day, no matter who or what else we are, we all have the same instincts, desires, wants and needs. And no matter what we look like, or where we come from, we’re all human.  Fantastic… Tim Cundle

*Or, in this case, inhuman.