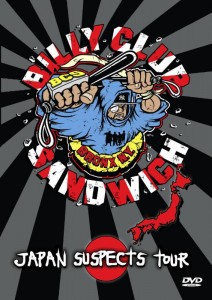 This is a bit of an odd release – there aren’t that many big hardcore bands that put out a commercial DVD let alone the smaller bands, but here Billy Club Sandwich from The Bronx, New York have done just that, and to be honest why not?!

The main feature on here is taken from a show in Japan, interspersed with tour footage of the band drinking and having fun. The live footage is excellent quality both picture and sound-wise, with both the band and crowd getting into it. If you’re not familiar with BCS, they are the embodiment of NYHC from the mid-late 90s. Bands like 25 Ta Life, No Redeeming Social Value, Skarhead and Everbody Gets Hurt were their peers and if you like those musical styles then this will be right up your street. Much like NRSV, they don’t take themselves too seriously and their advice would be to kick back with a bunch of beers and this DVD cranked up loud.

Accompanying the main feature are various video clips, interviews and photos, adding up to 70 minutes or so of NYHC party style. Tom Chapman