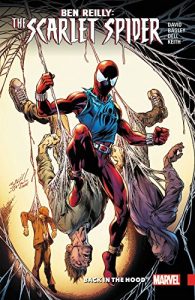 Spider-Man, Spider Man, does whatever a spider can. Spins a web, any size. Catches thieves, just like flies. Look out! here comes the Spider-Man!

Only it’s not really THE Spider-Man anymore in the good old Marvel Universe as there are dozens of the buggers crawling around.  As well as the original Peter Parker, there’s Miles Moralez (the  refugee Spider-Man from the Ultimate universe) and Spider-Man 2099 scuttling about.  There’s a few Spider-Women, Spider-Gwen and countless Spider-Men from alternate realities. There’s Silk, who got her powers by being bitten by the same pesky radioactive spider that Petey did.  Heck, it wasn’t too long ago that everyone got spider powers during the Spider Island storyline.  And I’ve not even mentioned the various Venoms, Carnage, Toxin and the rest of the symbiote Spider-types.  Marvel have a LOT of spider based folks lurking about in the plugholes of their comics.

Which brings us to Ben Reilly – literally a clone of Peter Parker himself, and blimey he’s had a rough time.  You see, back in the day (1973 to be exact), Peter Parker’s biology teacher, Miles Warren, went off the deep end due to death of Gwen Stacey, Peter’s girlfriend at the time.  In a totally normal reaction, Miles became the costumed villain The Jackal and created clones of Spider-Man and Gwen.  It all ended in a big fight where both the Jackal and Clone Spidey died in an explosion.  Only the clone didn’t die! Shock!  He instead went off, called himself Ben Reilly and even became a super hero – The Scarlet Spider!

Now here’s where it gets complicated.  The Scarlet Spider (Ben) and Spider-Man (Peter) inevitably meet up to the confusion of all.  Peter ends up thinking he’s the clone so retires and hands the mantle of Spider-Man to Ben (who now thinks he’s Peter).  Eventually Ben (as Spider-Man) gets killed by the Green Goblin and disintegrates into a pool of slime, proving he was the clone all along. Peter comes out of retirement and normality is resumed (or what passes as normality in the spider-verse anyway).

Unsurprisingly, Ben comes back from the dead, resurrected by none other than the Jackal who has also proven that death is just an inconvenience. The Jackal proceeds to kill Ben, resurrect him and then kill him again.  And then starts over! All in the name of science obviously.  Being tortured and repeatedly murdered sends poor Ben insane (understandably).  He eventually breaks free, kills the Jackal and promptly becomes a new Jackal!

Using the (old) Jackal’s technology as the (new) Jackal, Ben goes around creating clones of pretty much anyone who’s ever died as a result of Spider-Man’s crime fighting career.  To finance this he builds a pharmaceutical company that cures hundreds of incurably sick people.  Only he doesn’t actually cure them, he replaces them with a healthy and disease free clone.  Sneaky.  Of course, the real Spider-Man gets involved and basically blows everything up.  Ben is apparently killed in the blast and all the clones get dissolved into slime.  Happy days.

So this is where this collection picks the story up.  If the title hasn’t given it away, it’s not a huge spoiler to let you know that Ben Reilly didn’t die.  But what’s an insane clone, on the run from his original template and with no access to his previous fortune to do?  Go to Vegas obviously.  And to avoid unwanted Spider-Man type attention, Ben decides to go back to his original alter-ego of the Scarlet Spider (well, he is insane after all).  To get some cash behind him Ben manages to convince a former customer (who happens to be a crime lord and casino owner) that with a small investment, he can actually cure the incurable.

Enter a bit of a complication in the form of Kaine!  Kaine’s yet another clone of Peter Parker, the imperfect first one that’s degraded a bit.  Kaine started out as a villain, jealous of both Peter Parker and Ben Reilly but later reformed.  Ironically (or inevitably) Kaine took up the identity of the Scarlet Spider after Ben’s heroic ‘death’ at the hands of the Green Goblin.  Now he wants to kill Ben once and for all because there’s only room for one Spider-Man  clone in the Marvel Universe!  That’s actual clone (obviously) and not just people with the same powers or Spider-Men from different realities or alien symbiote or whatever.

This book collects Ben Reilly: Scarlet Spider # 1 – #5 and some of Clone Conspiracy: Omega #1.  I’ve always been a fan of Peter David’s writing and loved what he did with the Hulk and X-Factor.  He doesn’t quite reach those giddy heights here, but he comes close and there’s definitely the trademark Peter David vein of humour running through it.   The bits featuring Ben’s ‘Aunt May’ are comedy gold.  Then there’s the Web Spinners, because you can never have too many Spider-Men in a story!

So if you’re a fan of Spidey and fancy some spider related antics that don’t actually feature Peter Parker you should be checking this out.  Or if you’re up for an action packed clone vs clone battle fest.  Or if you want a good read that keeps the funny in funny-books.  Most of you then? Roll on volume two… Paul Ferriday