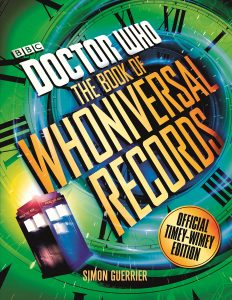 It could be tricky to agree on obscure facts before the internet, you know.

It probably seems bizarre to younger readers of this site, but there was a time when an argument about the biggest grossing movie, or the best-selling song of the year would more than likely stutter to an end unresolved, with everyone involved sure they were right, and nobody with any way of proving it.  There was no Wikipedia, no IMDb, no handy central repositories of facts and figures, accessible by a few button presses from anywhere in the world.

In fact, the only genuinely definitive information source was the famed Guinness Book of Records, a thick annual hardback, compiled by the splendidly named Norris McWhirter, in which all sorts of official records were listed in a variety of often slightly peculiar categories.  Tallest, shortest, oldest, youngest, nearest, furthest away…it was all in there.  For me, and many other geeks like me, the Guinness Book was a yearly treat – as essential a Christmas present as the latest Doctor Who Annual and a Terry’s Chocolate Orange.

What it wasn’t much cop for though was arguments about anything more small-scale than that.  So if you wanted to know the earliest-born cast member ever to play a companion in Doctor Who, for instance, well, you were out of luck, basically.  All you had were memories and guesses and, if you were lucky, a set of dog-eared magazines which might, conceivably, contain the information somewhere in their non-indexed pages.

Which is why the recent BBC offering, Simon Guerrier’s Book of Whoniversal Records is such a welcome, if long overdue, addition to the ever growing library of Who titles.  A chunky, colourful hardback, running to 224 pages, it lists exactly the kind of records that most thoughtful Who fans will have considered at some point in their lives.  Want to know which companion spent the longest period adventuring with the Doctor?  Or which knew him the longest (there’s a difference, you know!)?  Both of those are in here.  Who’s killed the most people?  Who’s died the most often?  Yep, both present and correct.  And so on.  It’s packed full of the fascinating, the unexpected and the plain odd (and also, frequently, the damn funny).  Personal favourites include ‘The Quickest a Story Kills Someone on Screen’, ‘The TARDIS’S Least Effective Disguise’, The Least Wordy Novelisation’ and ‘The Largest Number of Consecutive Episodes without us Seeing the TARDIS’.

This is a book designed for dipping in and out of, really – and, like the original Guinness Book, for regular updating.  Simon Guerrier’s to be congratulated on a job well done.  I hope to see a new edition next year!

Oh, and the earliest born companion is May Warden, who (briefly) played the aged Sara Kingdom in Dalek Master Plan. If you want the answers to the other questions, though, you need to buy the book… Stuart Douglas