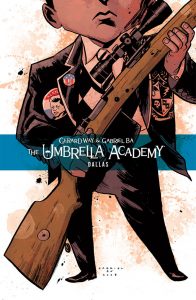 The Netflix original series The Umbrella Academy is adding more members. Based on the popular, Eisner award-winning comics and graphic novels created and written by Gerard Way (My Chemical Romance), illustrated by Gabriel Bá, and published by Dark Horse Comics, the series is adding cast members Tom Hopper as “Luther,” Emmy Raver-Lampman as “Allison,” David Castañeda as “Diego,” Robert Sheehan as “Klaus,” and Aidan Gallagher as “Number Five.”

The live-action series follows the estranged members of a dysfunctional family of superheroes (The Umbrella Academy) – Luther, Diego, Allison, Vanya, Klaus and Number Five – as they work together to solve their father Reginald Hardgraves’ mysterious death, while coming apart at the seams due to their divergent personalities and abilities.

The Umbrella Academy will be produced by Universal Cable Productions. Steve Blackman (Fargo, Altered Carbon) will serve as executive producer and showrunner, with additional executive producers Bluegrass Television and Mike Richardson and Keith Goldberg from Dark Horse Entertainment. Gerard Way will serve as co-executive producer. The pilot script was adapted from the comic book series by Jeremy Slater (The Exorcist).