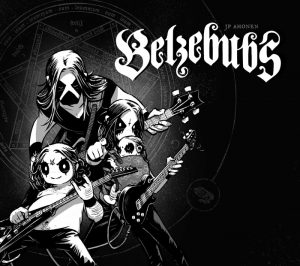 It isn’t easy being a metal-head, especially if your taste in music is a little more brutal and extreme than that of those of your average, every day run of the mill riff disciples. To really understand the plight and joyous sorrow of what it means to be a slave to the blast beast, you have to be one of dark hearted devotees of the harder metal sub-genres. It’s a semi-exclusive club in which Belzebubs artist, writer, creator and stygian overlord JP Ahonen has a seat on the board of directors. Heck, I wouldn’t be surprised if he was, secretly, the Chairman as his innate understanding of what it means to be a rabid fan of outsider culture is writ large in every page and panel of Belzebubs.

Imagine the Addams Family taken to the nth degree and you’ll have a pretty good idea of the world that Ahonen’s wonderfully strange, bizarre and endearing characters inhabit.  It’s the story of family who live every single Black Metal stereotype and cliché to the absolute fullest. The father plays in a struggling band who can never hold on to a drummer, the mother attempts to hold the family together while ensuring that they all maintain their fervid belief in the blackest demons and devils, the daughter struggles with her first crush on a “normal” while the youngest member of the clan enter a rebellious phase that involves a brief flirtation with the favourite son of Heaven.

Embracing, and incorporating all of the whispered untruths and rumours that surround one of metals most underground genres , Belzebubs takes the blueprint of the modern nuclear family and gleefully twist it into a counter culture extravaganza that would make Charles Addams and Al Feldstein grin with delight and thrown the horns high. Packed full of in jokes and the sort of humour that casually flips the bird at anyone who isn’t down with the power of the riff, Belzebubs celebrates the beauty of individuality and difference and enforces the idea that they’re something to be cherished.  Its stark black and white art captures its subjects perfectly and serves as a torubo-charged vehicle for Ahonen to tell his tales of familiar harmony and discord from the not so dark side.  I’m not, by nature, given to mirth and frivolity, but as I sat in the centre of my chalk drawn pentagram reading Belzebubs by the scant illumination cast by the candles burning at each of its points, I laughed so hard, I nearly soiled myself, which would not have pleased Lucifer at all.  JP, I bow to your genius sir, for thou hath created one of the funniest, most instantly relatable and charming books it has been my pleasure to read in many a year. Oh, and um, Hail Satan…  Tim Cundle