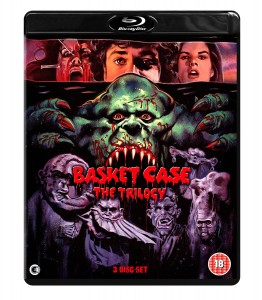 Given the same loving treatment they lavished upon their ‘Re-Animator’ reissue, Second Sight now offer a lovely blu-ray steel-book version of the ‘Basket Case’ trilogy, which is great news for fans of this 1982 curio, even though the film itself is terribly acted, terribly shot, terribly scripted, and crammed with terrible effects. Yes, it’s so bad, it’s good, and there’s a raw DIY vibe to the whole production that appeals to my punk sensibilities. Just as punk rockers were inspired to pick up guitars and have a go, never letting a lack of talent stifle their creative voice, so director Frank Henenlotter grabbed a 16 mm camera and a few of his friends and made the Basket Case films.

The first one is of most interest, as it establishes the characters and their ludicrous back story (Duane Bradley and his deformed, murderous Siamese twin whom he carries around with him in a basket…) and is shot through with a gung ho attitude and irreverent humour. The sleazy neon backdrop of New York City at night is totally befitting, and the whole thing works in a way it really shouldn’t, given how fucking awful it really is. Even the clunky stop-motion effects are endearing if you disengage your brain and just let it all unravel in front of you like a car wreck.

The next two instalments in the series boast slightly larger budgets, which means more outrageous freaks and more slapstick gore, but they haven’t aged particularly well compared to the likes of, say, ‘Society’ and ‘From Beyond’, both of which seem to have provided some of the inspiration for the gloop, in the third film at least, and they come across as just plain daft – rather than scary, shocking and/or hilarious, which would have been the intention.

But as a time capsule, from back when some film makers really didn’t give a flying fuck whether you watched their movie or not, ‘Basket Case’ is – thankfully! – one of a kind. And as we’ve come to expect from Second Sight, the extras are generous and interesting, especially the interview with the visionary artist Graham Humphreys, who painted so many of the amazing film posters from the heyday of Eighties horror. Ian Glasper