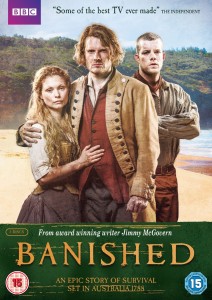 Banished (BBC DVD)
Of all the heinous crimes inflicted upon its citizens by a so-called civilized society, Transportation (or as it’s more commonly referred to, penal transportation) was one of the most unforgiveable, torturous and demeaning. Criminals, often convicted of the most petty of offences, were shipped to far-off prison colonies, and despite being assured that they could return once their sentence was served, realistically the prospect of them ever making it home was incredibly slim. Once you were shipped out, for all intents and purposes, you were deported from your homeland and abandoned in an alien environment. ‘Banished’ is the fictionalised account of the first Australian prison colony (founded in 1788). Focussing on the daily battle for survival faced by convicts, garrisoned soldiers (who served as prison guards) and civilian staff alike, it reveals a particularly savage period in British history when the varying degrees of guilt, innocence and culpability become increasingly blurred amongst a governing and inmate population whose lives and fates become hopelessly intertwined in their new “home”.
Deeply moving and ferociously brutal in equal measure, and cut from same cloth as ‘Black Sails’ and ‘Sharpe’, ‘Banished’ doesn’t pull any punches in its story telling and examination of the stark reality faced by the people whose lives it charts as their existence becomes harder and harder. The grossly disproportionate gender ratio of colonists for instance meant that men were forced to share women, and women forced to become the “property” of more than one man, unless married, which while abhorrent, becomes an integral part of the many entangled plot lines. It’s a story of murder, revenge, lust, betrayal and death in a virtually escape proof gaol that plunges the depths of despair, while extoling the values of friendship and co-operation, while never forgetting the lengths that men and women will go to in order to live another day or get what they want, as selfishness, greed, honour and loyalty collide head on, as all involved are shaped by their surroundings, some for the better, but most for the worst. And if you’re the sort who expects a happy ending and a joy filled finale, then this probably isn’t the series for you, as nothing ends the way you’d expect it to in this riveting, involving and immensely watchable drama that leaves you desperate for more and it’s proof positive that the BBC can still pull a rabbit out of the hat when they need to. Thoroughly recommended… Tim Mass Movement