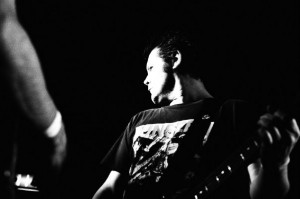 It was the 22nd of May, 1984. The place was Nottingham and the venue was Zivargos, a club in the middle of town, I say club because it didn’t seem like the typical venue. It was clean for one and there were little tables at the back, a dance floor and then the stage.

Broken Bones, the band I played bass for at the time, were playing there supporting Black Flag and originally Hüsker Dü, but they never left the USA for some reason.

We find the venue, get in, walk down the stairs get our equipment in and after getting over the surprise and shock that we were playing there, were confronted by two men doing sit ups and press ups by one of the tables at the back. One of them, a young Henry Rollins, looked up at these scruffy punks from Stoke then carried on with what he was doing.

After what seemed like ages waiting for them to finish their sound check we got a 10 minute slot to thrash through a couple of songs before the doors opened.

The first band on were just a few of the Black Flag roadies, the Nig Heist, who just seemed to jam along and make stuff up while singing lyrics that were not unlike The Meatmen. Slightly inappropriate but kind of funny.

So then it was Broken Bones’s turn to play and by this time there were a lot of people in the crowd, which will become significant later. We play a great set and go down really well, with lots of people stage diving, singing along to Decapitated etc. 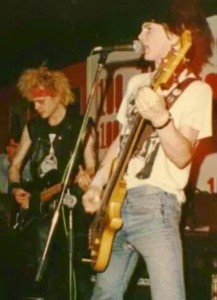 We head off backstage, move our equipment off the stage, grab a beer and wait for Black Flag to start. In the meantime we were thinking that everyone was hanging around the bar area at the back, so when Black Flag hit the stage and start making a noise we assuming that people would start to make their way to the front. They kick in with a song, that ends, then another but there’s not a great deal of people watching them, well only about half of what was in front of me whilst blasting out ‘I.O.U Nothing’ a little earlier. It turns out (we later found out) that most people had come to see us and left when we finished.

I know, that at the time, Black Flag were an acquired taste and a lot of people in the UK didn’t quite get them, with the out of tune but sounding sort of right guitar solo’s by Greg Ginn. People, including me, were used to the slickness of Bones from Discharge.

Anyway, watching them was quite an experience. Rollins was his usual self, all evil stares, just wearing a pair of shorts and his long hair stuck to his face due to his excessive sweating. I felt scared just to look at him because he had this evil glare which said “Don’t you even think about fucking with me or I will rip your head off and shit down your neck”, yeah that kind of thing. Well, it was during one of those glaring moments that a girl sitting on the edge of the stage with her back to him and him standing almost over her doing the scary glare thing, that she stretched out her arm above her head and proceeded to place her hand inside his shorts and play a little pocket billiards. What did Rollins do? Nothing, he didn’t even flinch, look down, step back……Nothing. Not a twitch. He just carried on singing as if nothing was going on. She soon get bored of not getting a reaction (or an erection for that matter) so grabbed a cigarette off a friend and carried on drinking and smoking.

Safe to say the rest of the gig finished with no problems and Black Flag were great. Henry, Greg, Kira and the drummer (sorry, I’ve forgotten his name It was Bill Stevenson – Ed) played some of the classic songs that they became famous for and we drove back to Stoke knowing that we were the better band in (most of) the crowds eyes. So there you have it, a little insight into life into playing punk rock in the mid eighties… Paul Hoddy