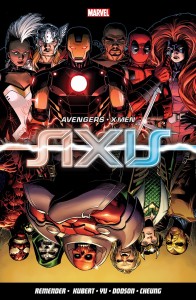 Avengers & X-Men: Axis – Rick Remender, Adam Kubert, Leinil Francis Yu, Jim Cheung & Terry Dodson (Marvel / Panini)
Hate is a powerful thing. It’s been responsible for wars, genocide, countless murders, has turned brother against brother, sister against sister and has continually fed on human frailty, greed, anger and pain since time began. So, when the Red Skull (after Magneto “kills” him) becomes Red Onslaught, a colossus who spreads hate throughout the world via his telepathic powers (which he achieved through grafting Charles Xavier’s brain on to his own), forcing the population of every country to turn on each other in a succession of riots and conflict, the whole end of the planet thing starts to seem like an imminent possibility instead of the main topic of conversation of conspiracy theorists and the half-baked battle cry of far right militias and their crazy followers.

With ‘World War Hate’ seeming like it could break out at any moment, The Avengers and The X-Men rush to confront Red Onslaught and bring an end to the madness that it’s inflicting on the world. But thanks to Tony Stark, their nemesis is prepared for them and greets them with the most sophisticated Sentinels ever built, Sentinels designed by Tony Stark, Sentinels created in order to counter the powers of, and be able to restrain and imprison, every hero on Earth. Facing impossible odds and with no prospect of victory, Magneto recruits the world’s worst villains to aid in the fight, an army that the Sentinels aren’t prepared for, but even that isn’t enough. In a desperate last ditch play, the Scarlet Witch and Doctor Doom cast a spell fashioned to switch the Onslaught’s “Axis” and divert control to Xavier, whose personality lives on in the mind he now shares with the Red Skull, a Hex which works a little too well. As well as flipping the Red Skull’s personality on its “Axis”, it also inverts the personalities of all the heroes and villains engaged in the war against the Red Skull and his Sentinels, and slowly but surely The Avengers and The X-Men begin to turn on each other and the world at large, and as the ‘Axis’ begins to weave it’s magic, each side realises that he who controls the Red Skull, the inadvertent and unsuspecting centre of this new crisis, controls the Earth. Battle lines are drawn, and plans put into action, and with the Apocalypse looming, the only thing standing in the way of global destruction, is a rag-tag bunch of former super-villains who suddenly find themselves tasked with becoming Avengers and doing what Avengers do. Saving the Earth and saving humanity. And that boys and girls is when things start to get really interesting.

‘Axis’ has everything that any fan-boy (or girl) could ever want from a book. A lightning fast, everything changes in an instant engaging and enthralling plot, eye popping and jaw dropping art that leaps off the page, upside down and twisted around characterisation that turns major and minor players inside out and sends them spiralling in strange and unusual directions (especially Sabretooth, Iron Man, Hulk and Havoc) that should send ripples through the Marvel Universe for the foreseeable future, snappy dialogue, copious amounts of bone snapping action and a story that batters you into submission and pummels your imagination into a shivering and quaking wreck, leaving you sated, satisfied and worn out. It’s everything a major comic event should be and more besides, and as well as being one hell of a ride, it’s also kicked open the door to a Universe of possibilities that Marvel can, and hopefully will, dive through. Fantastic… Tim Mass Movement