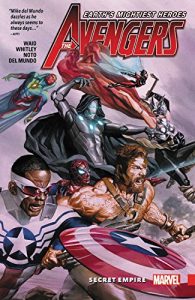 Ladies and gentlemen, boys and girls, Doom is here. That’s right folks, not content with assuming Tony Stark’s position as Iron Man, Victor Von Doom has now seen fit to join the Avengers. Or more accurately, have them join him and in Secret Empire he not only recruits them to his cause, but also returns to save the day when one of the Avengers oldest, not quite forgotten by everyone, enemies returns to the fray seeking more than a modicum, and her fair share, of vengeance. Because that’s what the super-villains of yesterday still insist on doing. They want revenge on the heroes who humiliated, beat and stopped them in their tracks and instead of using their incredible powers to pull off a series of get rich quick heists and then use the proceeds to buy a Caribbean island and retire in luxury, they get stuck in an endless loop of defeat after crushing defeat and refuse to learn the principle law that governs everything in their corner of the multiverse. That eventually the good guys always win.  Okay, so the returning foe chapter of Secret Empire is a massive cliché, but in the hands of Mark Waid and Jeremy Whitley, it’s a thoroughly entertaining one. And who doesn’t like Doom’s bad guy doing good thing?.  Nobody that’s who. Everybody likes it and it never gets old.

After Victor gets through with saving the Avengers from disaster with a little help from Wasp, the sole member of his fan club, Secret Empire then spreads it’s a wings. In a trio of terrifically tantalising tales of triumph*, Mark Waid and his artistic team of pencilling and inking genii, reveal what happened to Thor when she went missing for the majority of Secret Empire, what the reverse Avengers got up to while being led by the Superior Octopus (which as you’ve probably already guessed is no good, and involves aliens in a not what you think it is story of an invasion tha isn’t really an invasion) and explores the doubts, fears and insecurities of the Avengers in a post all conquering Hydra world. The artwork looks incredible and thanks to Waid guiding their destiny with his adamantium hard dialogue and characterisation and innate gift for story-telling, the Avengers remain at the top of pull list mountain. And as every four colour fan knows all too well, Doom makes everything better… Tim Cundle

*Straight from the Stan Lee school of alliteration.