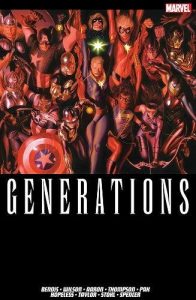 Everything is connected: those quiet, lonely moments of introspection and the cataclysmic world changing events; the brooding, self-absorbed businessman who sits on an empty throne governing a choir of diligent idiots and the half-starved, single parent desperately doing whatever they can to keep food on the table and the lights on. They’re all hopelessly intertwined on a macrocosmic level, dependent upon each other to ensure that whole pushes forward and moves onward, ever onward, functioning thanks to a series of incidents, accidents and coincidences that ensure life just about stays on track throughout its journey.

Just as it’s a truism of our reality, it’s also part of the fixed narrative of the Marvel Universe; and in Generations, during the closing moments of Secret Empire the ties that bind the heroes – who on the surface simply share a name but underneath all the bluster, bravado that comes with saving creation on a near weekly basis share far more – are fully explored. Blasted through time, and in at least one case space, by an at first seemingly inexplicable MacGuffin which is later revealed as a rather touching, and clever omniscient apology, the super-powered heroes of today are brought face to face with those who originally bore their name in a series of connected (I told you, everything is part of the same whole) one shots that incorporate, answer and deal with the issues that lie at the core of each of their personalities.

From Amadeus Cho discovering what being the Hulk really means thanks to being forced to partner with Bruce Banner when both end up fleeing the military might of a particularly rabid General Ross to Carol Danvers being given one last chance to fight alongside Mar-vell and coming to understand what her role as Captain Marvel actually entails. From Hawkeye being pushed to remember how fortunate she was, and is, to have Clint Barton as her mentor when they become pawns in a jungle based variation of the Battle Royale scenario to Miles Morales and Peter Parker sharing incredibly personal, pivotal moments in their lives which grants the former the chance to see the latter in a whole new light and fully and fundamentally appreciate the mantra instilled in him by Uncle Ben. And from Thor being given the chance to see what shaped her predecessor and led him to become the God he is following a Viking “incident” in Egypt to Jean Grey beginning to comprehend the raw power of the Phoenix after battling Galactus alongside her old self, it’s all here in these pages, in these tales that capture their subjects at their most vulnerable and which allow them to at long last cast off the burdens of yesterday and look to the future.

As with all anthologies and compendiums, there are individual stories in Generations that stand on the shoulders of the other, fantastic in their own right, entries and burn brighter than a supernova while lingering long in the memory and imagination. And Nick Spencer’s The America’s, in which Sam Wilson helps guide his oldest and dearest friend down the path to greatness and rediscover who he is during his darkest hour, and Tom Taylor’s tale of a long overdue, much needed family reunion that punches you straight in the heart and sends you careering out of control on an emotional rollercoaster, The Best, are the major league champions in this collection.  Both of them reduce you to your constituent atoms before, in much the same manner as they do with the protagonists at the centre of each, building you back up and sending you on your way, ready to face the world again.

Each and every writer and artist involved in Generations is at the top of their A-game, firing on all cylinders and absolutely delivers above and beyond any, and all, expectations. It’s a beautiful, emotive series of intimate snapshots that reminds you that underneath the masks, costumes and capes, the characters at the heart of these stories, are just people. They’re just like the rest of us, they live, laugh, love, cry and get battered, bruised and beaten by life and it’s here in the art and prose of Generations that they finally discover who they are and who they’re meant to be. Magnificent… Tim Cundle