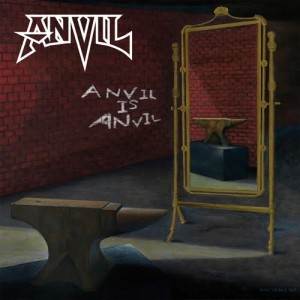 These Canadian metal-heads should have really been massive. During their sixteen album career, they’ve released some incredible music, but somehow have never fulfilled their potential. When most bands seem to struggle so deep into a lengthy career, Anvil have actually produced their best, most solid record to date. Sure it’s got the traits the trio have held onto since day one, sure it’s got some almost comical moments (hell, it wouldn’t be Anvil if it didn’t have would it?), but the distinction within ‘Anvil Is Anvil’ lies in the fact that this record contains twelve banging, heavy metal monsters. Memorable choruses, memorable rhythms and devilishly metal titles – whether it’s the fictional fun of ‘Daggers And Rum’ or ‘Zombie Apocalypse’ or the serious issues addressed during ‘Gun Control’ (need I say more?), ‘Die For A Lie’ with its religious undertones, or the lessons learned in life featured on ‘Ambushed’. Something about ‘Anvil Is Anvil’ is supremely fitting, and you know what? Its sound is oddly refreshing. With frontman Lips putting on such a physically powerful performance, and long term musical partner Rob Reiner pounding the drums, they sounds like an energetic, enthused, fresh faced bunch of teenagers, which at heart, is what they really are. ‘Anvil Is Anvil’ is a fitting title for what is, undeniably, the bands best album to date.  Mark Freebase