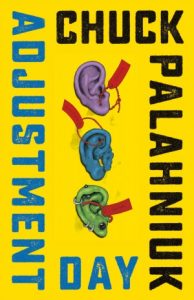 The Conquistadors had the Bible. Mao’s army had his book of quotations. The Nazis had Mein Kampf. American radicals had Saul Alinsky. And, in the novel ADJUSTMENT DAY, the Millennials will have the Declaration of Interdependence. Smug, geriatric politicians bring the nation to the brink of a third world war in an effort to control the burgeoning population of directionless young males; working-class men dream of burying the elites; and professors propound theories that offer students only the bleakest future. People are ready for the reckoning. They’ve been reading a mysterious book and memorizing the inspirational slogans of the Declaration of Interdependence:

The weak want you to forgo your destiny just as they’ve shirked theirs.

A smile is your best bulletproof vest.

The joy of fiction is that it only needs to smell true.

And when Adjustment Day arrives, Palahniuk fearlessly takes us through the logical conclusion of every separatist fantasy, alternative fact, and conspiracy theory lurking in the American psyche.

ADJUSTMENT DAY is a quintessential Palahniuk novel. (Who else would remind us what ancient shepherds, the Babylonian Code of Hammurabi and King Henry the VIII have in common?) It is a novel about the power of words, and our collective ability to misunderstand those words in profound ways. It is compelling and challenging, timely and timeless. On sale on May 1, 2018 from W. W. Norton & Company, ADJUSTMENT DAY is Palahniuk doing what he does best, skewering the absurdities in our society, unafraid to offend all parties.

The following in an excerpt from the novel…

“His telephone woke Gregory Piper before dawn. According to the screen it was his agent calling, but Piper knew better. He’d pick up, and it would be a young voice, entry-level young, an assistant telling him, “Hold for a call from Mr. Leventhal, please.” A loud click would indicate he’d been put on hold, to wait while his agent finished another call. Or two. Piper knew where he stood in the pecking order.

He looked at the bedside clock. Five-thirty, Pacific Standard Time. It wasn’t even banker’s hours in New York. Over the phone a voice asked, “Gregory?”

Piper sat upright in bed, stunned to hear his agent. It was dark outside. He could hardly hear the freeway.

The voice continued, “Have you seen the television?”

Using his free hand, Piper dug among the sheets and blankets for the remote control. “Which channel?”

Piper found the remote and switched on the television near the foot of the bed. Filling the screen was himself, wearing his blue Savile Row single-breasted suit. Looking directly into the camera, he said, “This is Talbott Reynolds . . .”

Piper tried a new channel, and he was there again, saying, “. . . appointed by the Council of Tribes.”

Over the phone, his agent demanded, “Did you sign anything?” Without waiting for an answer, he said, “We’re still waiting on those contracts.”

Between every televised glimpse of himself, Piper found no sports, no music videos, no advertisements. On a fourth television station, he was saying, “El dia de ajustamiento esta sobre nosotros.”

He considered the envelope of cash and if accepting it had implied a contractual agreement. It was stupid, but he hadn’t mentioned the money to anyone. If he could avoid the tax obligation he would. On a new television channel he was proclaiming, “Before creating anything of lasting value . . .”

That was his improvised line. Now the beer-swilling, cruller-munching production crew, they’d have to give him a writing credit on the project.

Another channel showed him saying, “. . . we must first create ourselves.”

The clock-radio on his bedside table went off, but instead of a morning traffic report, it was his voice saying, “. . . we must first create ourselves.”

Over the phone, his agent stormed. “We’ve already issued a cease and desist!”

On television, dignified and handsome, delivering his best Ronald Reagan tinged with his best JFK, Piper declared, “Adjustment Day is upon us.”

The phone held between his hunched shoulder and his ear, Piper rose from the bed and found his bathrobe. The doorbell chimed, again, as he tied the belt.

The television repeated, “Adjustment Day is upon us.” To anyone except him this would look like a repetition of the last take, but Piper heard the slight variation in how he stressed each word.

In his ear, his agent swore, “It’s on the radio and all over the web!” Over the phone’s tiny speaker came the layers of sound, each offset by a microsecond. “Adjustment Day is upon us.” An entire choir comprised of Talbott Reynolds. The synchronized voices resonating like a chant.

“Adjustment Day is upon us.”

Piper crossed his living room and squinted through the peep-hole on his front door.

From the bedroom television. Over his phone. From neighboring apartments, the words came. “Adjustment Day is upon us.”

At his door stood the man with the cauliflower ears and neck tattoo of a swastika. Piper wracked his memory for a name. The low-rent cinematographer. Into the phone, he said, “They’re here.” It was dawn with the light rising behind the visitor. Edging toward morning rush hour, the noise of the 101 grew louder.

The chorus of words seemed to fade and blur. “Adjustment Day is upon us.” Becoming audio wallpaper. A new normal. White noise, like the freeway. Room tone.

Piper opened the door. He had the name, “You’re LaManly, right?”

The man, LaManly, reached into his jacket and produced a pistol. Without a word he leveled it at Piper’s chest”

Palahniuk will be signing copies of ADJUSTMENT DAY at the following bookstores:

TUE 1st May – Powell’s (Hawthorne) Portland, OR (no tickets required)