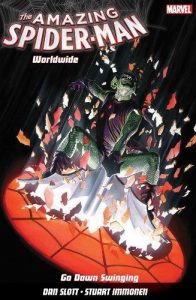 History is littered with partnerships that, instead of fading into obscurity, have weathered the ages and become the stuff of legend. Caesar and Cleopatra, Arthur and Excalibur, Tom Sawyer and Huckleberry Finn, Laurel and Hardy, Han Solo and the Millennium Falcon, the Silver Surfer and Galactus and Dan Slott and Spider-Man.  After a decade of being the architect of Peter Parker’s destiny, Dan Slott has bowed out and moved on to pastures new and Go Down Swinging is his wallcrawling curtain call, his last webbed hurrah and the concluding chapter in his astonishing run on Amazing Spider-Man.  And he saved every drop of creativity and imagination in his reserve Spidey tank for this five issue arc, because over the course of this final story, Slott not only goes out with a bang, but just like Pete, he goes down swinging.

Of all the villains who have crossed Spider-Man’s path during his long and illustrious career, the one who has shaped, driven and moulded him more than any other is the Green Goblin. Having locked webs and horns more times than either of them would care to remember, their relationship is fraught, complicated and driven by mutual hatred. So it’s only fitting that one of the greatest Spider-Man writers of all time should finish his tenure with a pulse pounding, balls out, last man standing, anything and everything goes showdown between Pete and Norman.  With the unhinged, and completely and utterly deranged, Osborn upgrading himself to Goblin 2.0 by bonding with Carnage, nothing is anathema when it comes to him ridding the world, and himself, of Spider-Man once and for all. Kidnap, murder, blackmail, exploiting and using family for his own twisted gain, Norman travels down every road he can think to fulfil his burning obsession, and Spidey, well he, his family and all of his friends find themselves at the end of Norman’s, reborn as the Red Goblin, barbed, very sharp stick which he uses to jab and stab at everyone associated with Spidey. Discovering Pete’s longest, and most well-kept secret, Norman goes after everybody his nemesis loves and cares about while at the same time, attempts to reclaim what he believes is his legacy. And with the aforementioned “upgrade” firmly in place, Norman is nearly impossible, as Pete and all of arachnid powered allies and associates discover, to defeat. It’ a bitter, harsh and painful lesson that they’re taught by the former Green Goblin, and one of Pete’s friends ends up paying the ultimate price as they sacrifice everything to ensure the Red Goblin’s defeat.

But this is the four colour world and as you’ve probably guessed, you can’t kill Spider-Man. Well, actually you can but sort of having done that already, Slott wasn’t about to go back and do it again. No, his parting gift in Go Down Swinging is to emphasis and place at the heart of the story the truism that dwells at the core of everything that Spider-Man is, has and will always be. That with great power, comes great responsibility and the way that you use, or abuse, that power defines the person you are and will always be remembered for being. It’s a tough path to follow and a hard code to live by, and it’s never been harder to adhere to than in Go Down Swinging. And in the midst of battle, it takes an old friend  reminding Pete of who he really is and what it is separates him from becoming Norman Osborn in order for him to do what he always does without fail and regardless of the cost; the right thing. Being seen off in style, and accompanied on his friendly neighbourhood swansong, by a veritable who of Marvel’s artistic crème de la crème, Dan Slott’s last Spider-Man story punches you in the heart, ties up loose ends and reminds the faithful why Spidey, even though he isn’t the biggest, toughest or most powerful player in the game, is the quintessential superhero. Even if he couldn’t spin a web anytime, catch crooks like flies and didn’t have radioactive blood, he’d still be a hero, because that’s just who, and what, Peter Parker is. A hero. Fare three well Dan Slott, it’s been one heck of a Spidey ride and you went out on top, leaving us with one of the best Spider-Man stories of the twenty first century. Absolutely essential. Tim Cundle