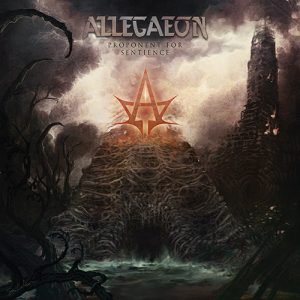 Allegaeon, the Fort Collins, Colorado based quintet are back with their newest album Proponent For Sentience a concept record about the near future possibility of sentient machines that also feel, becoming a reality. While some of the songs are real movers such as All Hail Science and Proponent For Sentience III – The Extermination (guest vocals by Bjorn “Speed” Strid of Soilwork and guest guitars by Benjamin Ellis of Scar Symmetry) the longer songs on the album, like Proponent For Sentience I – The Conception and Proponent For Sentience II – The Algorithm require a sit down to listen to fully, absorb and digest as they are much more dense musically and verge on progressive metal. The classical interludes in some of the songs are exceptional, helping to break up the tension that the record builds upon and the extended Flamenco style outro on Gray Matter Mechanics – Apassionata Ex Machinea is a pure joy to listen to for true music fans.

The guitar work is exceptional on the album, which is wonderfully produced with multiple guitar lines featuring in most songs and the drums going full blast almost non-stop and the tight bass lines ensure that the rhythm section is well and truly locked in and focused throughout. One of the questions that will inevitably come up will be about the vocals, as this is Riley McShane’s first album with the band. Happily fans have nothing to worry about as McShane fits perfectly in the music mix. This is one of the albums I was looking forward to this year and I can happily say it did not disappoint, and in fact exceeded what I was expecting from the band. If this is what Allegaeon are going for both musically and sound wise, then they could easily become one of the top bands in modern metal. Jason Bonton