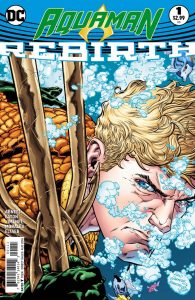 Aquaman is back and wowzers, the King of Atlantic is turning out to be the best of the lot in DC’s Rebirth line. Mixing politics and action with a very prescient, real world take on the King of the Sea, I don’t think it’s too much of a stretch to see the unfolding tale that takes up the first five issues of Aquaman as a metaphor for real life, modern day American politics at the least. The obligatory Aquaman Rebirth serves as a primer to new readers and a prologue to the coming story arc of American mistrust of (and possible war) with a foreign state they don’t, or maybe won’t, understand. To be fair the other side are not much better … and stranded right there in the middle is Arthur Curry, our hero. 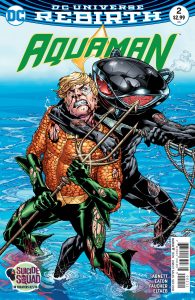 Aquaman, as we are told, inhabits this ground slap band in the centre of a contradiction. Half human and half Atlantean, he’s caught between the surface dwellers and the underwater kingdom he presides over. Working tirelessly to forge bonds between the two, he is not really trusted or beloved by either side. The surface world sees him as something of a joke, the merman who talks to fishes, yet beneath the waves his people consider him a sop to the world above and not truly one of their own. With this in mind Arthur has built a dry land Embassy in the USA where the two worlds can collide a little less violently and build bridges to a more meaningful relationship. Aquaman #1 and Aquaman #2 see the grand opening of this grand project and plays on the two races, both alien to one another, coming together and the cultural egg shells being walked on. Darker forces however are at work however and the peace process is in danger from a certain group of Atlanteans and the ultimate Aquabaddie. We are talking of the sort of terrorist boogie men that get called “militants” or “insurgents” in this day and age. 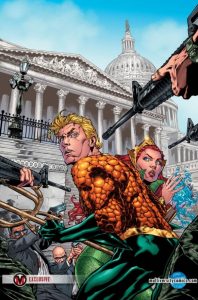 With an attack on the embassy and an incident out in the Pacific between Atlanteans and the US Navy, it becomes clear that Aquaman’s lofty ambitions are not going to be easily reached. There are simply too many people on either side who don’t want peace and blame entire nations (or worlds) for the sins of the few. Aquaman #3 finds Arthur and his lady Mera in the White House hammering home that particular analogy as we find Aquaman arrested, cuffed and thrown in a cell much to the disgust of Mera. Ever the diplomat, the imprisoned sovereign pleads for calm. It wasn’t his doing, it wasn’t all of Atlantis, it wasn’t an act of war but a terrorist act by a minority who are also the enemy all good Atlanteans. As if things couldn’t get any worse, a shady super-villain squad rock up to recruit Aqua-nemesis Black Manta and bond over their shared hatred of a certain King of the Seas … 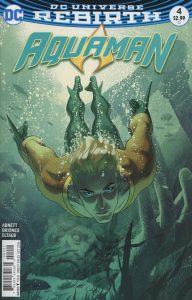 Things are getting tense now as skirmishes between the two worlds break out, and speaking of breaking out, well, Mera ignores Arthur’s pleas and it kicks off in fine style. Aquaman #4 and Aquaman #5 follow up with action packed inevitability of what happens when two sides just won’t or don’t want to listen or understand each other. Sounds familiar doesn’t it? 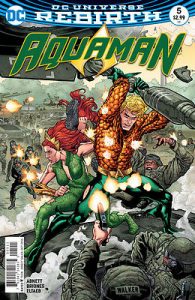 The Aquaman Rebirth is, I have to say, gripping stuff. The USA, who are held up as a representation of the surface world are painted as militaristic and quick to pull the trigger, blaming the barbarians of Atlantis who are stuck in some medieval tribal warfare loop. The denizens of the underwater world are painted as equally untrusting and arrogant, proudly clinging to their own sense of tradition and superiority. Aquaman cast as the peace maker in the middle cuts a noble and heroic figure with has a huge task on his hands. I’m certainly sticking around to see if his hands are big enough to handle it. Top marks DC! Top marks! 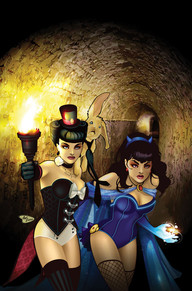 As if there wasn’t enough Aqua-excitement, the latest DC Comics Bombshells (#16) takes us back in time to an era of Atlantean lore where Mera and her sister were Princess pretenders to the throne and competitors for the affections of the future King. It does have a worrying look of “Disney Princess” at one point, but fortunately turns real dark, real soon. As a secret origin type affair with brash and colourful artwork it’s entertaining but the opening tale of wartime resistance with Catwoman, Harlequin, Batgirl et al in saucy get up may well be the bigger selling point of this particular episode … Lawks-a-lordy. Marv Gadgie