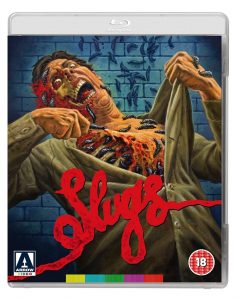 As a teenager I consumed books like Slugs, by Shaun Hutson, which were basically tasteless exercises in excess and gore that totally appealed to my warped sense of humour and love of video nasties. There was a whole host of insect/animal horrors around that time, most of them probably inspired by the unprecedented success of Slugs, from the likes of Guy N. Smith (Locusts, Bats Out Of Hell etc.) and Richard Lewis (Spiders, Devil’s Coach Horse etc.), all of which I consumed with the same voracious appetite as was demonstrated by the horrible critters in the books, but of all of them, Slugs seemed the most ludicrous to be protagonists in a horror story… because, let’s face it, who couldn’t outrun a carnivorous slug? And that just added to the daft appeal.

Surprisingly then, I never got round to seeing this Spanish-made film version of Hutson’s book, which was released in 1988, until now, when Arrow have thoughtfully restored it on Blu-Ray for a new generation of B-movie horror fiends. Yes, it’s incredibly schlocky, with a wildly melodramatic score, and some atrocious acting (the English lab professor who talks like Austin Powers is a particular hoot), but it boasts some reasonably high production values and some great special effects that just about counter-balance the outrageous cheese on offer. As such, it’s an enjoyable watch that you’ll have a lot of fun with, as long as you remember to disconnect your intellect before pressing ‘play’.

There’s plenty of extras too, as we’ve come to expect from these Arrow reissues, and as well as interviews with various actors and crew, you get the trailer which drips self-deprecating humour (“Don’t turn on the tap! Don’t go down to the basement! And… whatever you do… don’t make out when your parents are not at home!”) Best of all though, is the audio commentary with author Shaun Hutson, who admittedly had nothing to do with the film other than selling them the rights to his novel, but is a fascinating interviewee nonetheless. Ian Glasper