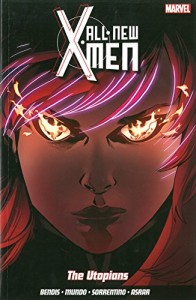 All New X-Men: The Utopians – Brian Michael Bendis, Michael Del Mundo, Mahmud Asrar & Andrea Sorrentino (Marvel / Panini)
Life has never been easy for the X-Men, but for the younger versions of Charles Xavier’s original team, brought forward in time by Beast’s hubris in an effort to prevent the growing schism – and Cyclops’ increasingly fervent mutant agenda – in the ranks of the X-Men, it’s been nothing but “difficult” (cough, understatement of the year, cough) since they arrived in the twenty first century. ‘The Utopians’, concludes Brian Michael Bendis’ incredible run on the title, and while I’m not sure what the future holds in store for the nineteen sixties originals, Bendis being Bendis, ensures that he not only ends his time on the book in style, but he also leaves the door slightly ajar in case anyone wants to follow in his footsteps. Although, to be honest, I can’t imagine anyone being brave, or foolish, enough to want to try, as he (Bendis that is) set the bar for mutant heroes in ‘All New X-Men’, as he has with just about every other book he’s embraced. Yeah, okay, I’m a Bendis fan (cough, understatement of year number two, cough), but until he started writing for Professor X’s students, I wasn’t really an X-Men fan (cough, understatement of the year part three, cough), but he made a believer out of me. Which, let’s face it, after more than three decades of comic book devotion and rabidly avoiding the X-Men (barring Joss Whedon and Chris Claremont’s time on the title of course) for that entire time, should tell you all you need to know about how good this book is.

Anyway, here it is, the final instalment of Bendis’ ‘All New X-Men’, in which we’re taken through our heroes’ involvement in the Black Vortex saga and Emma Frost teaches a young Jean Grey how to harness her powers in a showdown with The Blob; the young heroes learn about Utopia and in doing so finally learn a hard lesson about the reality of mutant survival in their adopted time and begin to come to terms with life following the events of the Black Vortex. Apart from the deep space shenanigans with the “weapon” that causes the downfall of the Kree Empire and brings Spartax to its knees, ‘The Utopians’ is relatively action-lite (although it could be argued that the sheer intensity of the adventure created in the wake of the discovery and destruction of the Black Vortex is more enough action for any book) focussing instead on the character’s “normal” lives and the relationships that exist between them. It’s a story of personal revelations and secrets coming to light and of discovery and acceptance, which includes one the X-Men finally coming to terms with who he is, that thrives on its multi-layered story-telling, razor sharp dialogue and achingly exquisite artwork. ‘All New X-Men’ is a wonderful, involving, engaging and absorbing book, and I’m going to miss it dreadfully, and if you’re the hip, with it cats that I think you are, I’m sure that you’re going to miss it just as much. So enjoy it one last time. Lose yourselves in ‘The Utopians’ and remember, even though nothing lasts forever in the four colour universe, books have a habit of popping up again when you least expect them. But until it does, as least we’ve still got this book and its predecessors. I can wait… Tim Mass Movement