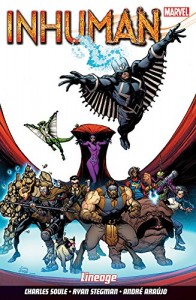 Inhuman: Lineage – Charles Soule, Ryan Stegman & Andre Araujo (Marvel / Panini)
When Black Bolt released the Terrigen cloud, mists, call it what you will, into the Earth’s atmosphere and then promptly “vanished” from the planet’s surface causing most of his people to assume he was dead, he irreparably changed the future of humanity and the Inhumans forever. Terrigenesis became a terrifying reality for hundreds of thousands of unsuspecting people and the secret existence of his own people, who had remained hidden from mankind for twenty millennia, suddenly became known to every man and woman in the world. Chaos, suspicion and mistrust, followed his actions, with Attilan, as the home of the Inhumans, landed in the Hudson River, became a permanent addition to New York’s skyline and forced both humans and Inhumans alike to find a way to live together in peace and harmony. Or at least it would have done, had this happened anywhere except the Marvel Universe, where nothing ever runs smoothly as someone, somewhere is always ready and waiting to throw a spanner in the works and bring the whole machine crashing down around them. Which is exactly what happens in ‘Lineage’, as Black Bolt finally returns to his people and one of the newly changed humans, or NuHumans if you prefer, in the spirit of “global change’ attempts to overthrow the old order and create something new in its wake. Like most attempted coups, it’s doomed to failure, but the price paid, and the sacrifices made, by all dragged in its wake might just be too much to bear.

Soule’s ongoing saga opens with Attlian at war with Ennilux; a multi-national Inhuman corporation who’s CEO seeks the return of what he believes to be his property, a young girl given shelter in the city, who was supposed to become his new vessel. It’s a conflict that doesn’t last long, as the returning King and Queen (yeah, Medusa abandoned her people as well folks. It’s a long story, you should check out in the previous volumes. You won’t be disappointed if you do) make short shrift of them, before coming to an “understanding” about the power vacuum revolving around ruler-ship of the city. And that’s before Lineage, one of the Nu-Humans launches his bid for power in a plan that humiliates and wounds bastions of Inhuman society and leaves Medusa and her entourage fighting for their lives. Its epic story-telling at its best as huge plot arcs, and doubtless the reason for Black Bolts act of madness, resolve themselves as Attilan and all its inhabitants plunge inexorably toward ‘Secret Wars. Yet, in the midst of all of these monolithic plots, Soule imbues his story with an incredibly human touch and doesn’t forget that it’s the little man that makes the world revolve, as he explores the lives, fears, loves and destinies of the NuHumans and ties their existence to that of Attilan and her people in his intriguing, intelligent and compulsive story. This book not only reads like a stone cold classic, it also looks as good as it reads thanks to the knockout, awe-inspiring work of Stegman and Araujo. ‘Lineage’ is just …well, it’s just brilliant. Absolutely brilliant… Tim Mass Movement