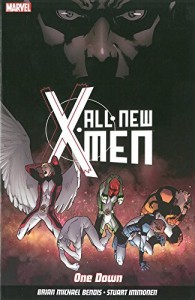 All New X-Men: One Down – Brian Michael Bendis & Stuart Immonen (Marvel / Panini)
How many X-Men does it take to change the world? If you’re Brian Michael Bendis, the simple answer is lots and lots. The more complicated, and far more interesting one, while also involving the word ‘lots’, slowly builds around mutants from the past, present and future facing each other in a battle for survival that may well determine the existence of, and the path it takes, the world’s premier mutant super-hero team, but the fate of the world itself and, whatever’s left of the X-Men when the dust settles, place in it.

Since Beast (who as our story opens is suffering a crisis of faith, as he mulls over the consequences of his actions and the effects that they could potentially have on thousands of different realities) forcibly brought the original X-Men into the present day, the road they’ve travelled has been a long and difficult one, and in ‘One Down’, with Cyclops having previously followed his father into space and essentially deserting his comrades in arms, the team, especially Jean, are in a state of flux. Which is when the Brother of Evil Mutants from the future strike again, hitting the team and the present day incarnation of the X-Men and their other students (those who sided with Cyclops that is) hard and without mercy. And as the conflict rages and the Brotherhood’s assault becomes increasingly brutal, Bendis finally allows the reader to peek behind the curtain and reveals the history of, and truth behind, ‘Charles Xaviers’ chrononauts and why they have journeyed into history to kill their predecessors, and believe me kids, in a deliciously plotted tale that twists and turns its way toward the finale, it’s not what you think it is. It’s better. And when the smoke clears and all is said and done, the future, while still unwritten, is certainly a little clearer for all of the X-Men.

‘One Down’ is a rollercoaster ride of furious action, fantastic reveals and wonderful characterisation that continues to surprise and entertain in a way I never thought an X-Men book could. Before Bendis’ current run on the X titles, I was never really a fan and it’s his incredible storytelling, and Stuart Immonen’s breath-taking art, that have not only made me a convert, but have transformed me into a unapologetic fan-boy whose desperation to find out next is matched only by his joy at the arrival of the next instalment of the series. It’s an addiction, that thanks to ‘One Down’ has been momentarily fed and fully sated, and for the time being, that’ll do. Hi, my name’s Tim and I am an X-Men addict… Tim Mass Movement