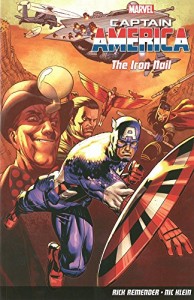 Captain America: The Iron Nail – Rick Remender, Nic Klein & Pascal Alixe (Marvel / Panini)
Some men were born to suffer; some men were made to save the world and some are willing to sacrifice everything in order to alleviate the anguish of the innocent, but few men are destined to do all of those things. In fact, there was, is and always will be, only one man who has, Steve Rogers. Or as he’s more commonly known, Captain America. But in the wake of the events of Dimension Z, the re-emergence of Ran Shen and revelation of Dr Mindbubble’s existence and his escape from nearly five decades of captivity, Steve Rogers days as the legendary super-soldier are numbered, and ‘The Iron Nail’ tells the tale of his final hours, and his concluding adventure as Captain America, the man he was born to be.

Having murdered Nuke and used him to free the aforementioned Mindbubble from incarceration in a maximum security SHIELD facility and having brought Nick Fury under his control, Ran Shen (The Iron Nail) sets out to expose his enemies’ greatest secrets to the world and frame them for the destruction of a small Eastern European country and thus set world opinion against them, and sets the pieces on the global chess board for what will undoubtedly be his final game. Crushed under the weight of fate and the blows it has dealt him and the burden of loss, and facing a crisis of confidence in all the things that he used to hold dear, Steve Rogers sets out to once again stop the bad guys and deliver the world from evil. With a newly invigorated Jet Black (the daughter of Zola who is also allowed to find her own path in the pages of this take) and his trusted ally, The Falcon, by his side Cap faces the sixties revolutionary answer to the super-soldier programme and his dragon spirit possessed accomplice, and in a mass LSD infused nightmare fights to the bitter end, and this time there’s no sugar coated, artificially sweetened triumph, just the hollow ring of sacrifice and forfeit as the true cost of victory is revealed as being almost too high to bear for everyone involved and Steve Rogers ends up paying the price for the sins and secrets of his friends and enemies alike.

‘The Iron Nail’ was never going to end well. While it looks incredible, the flavoured by sixties retro vibe with a hint of psychadelia art of Nic Klein and Pascal Alixe is almost at odds with Remender’s story, one infused with the desperate loneliness, loss of purpose and sense of separation from the world that overwhelms, and has been doing so since he returned from Armin Zola’s manufactured hell, the books hero. Even though the story unfolds, and is painted, on a huge geopolitical canvas, its surprisingly intimate, transporting the reader into the mind of Cap, allowing you to feel what he’s feeling and as the seconds tick down, the encroaching sense of doom becomes nearly too much to bear, it’s paralysing touch gradually creeping through the pages. The end, when it happens, occurs in much the same way as all things end, not with a bang, but with a whimper, silently and slightly out of focus as another old soldier slowly starts to fade away. It isn’t the end that I imagined, but it is a fitting one, an action packed, heart-breaking tale of daring heroics and the never ending fight against impossible odds, and it’s the way that Steve Rogers would have wanted to go out. But hey, this is the world of comics, the four colour universe and this isn’t the first time that we’ve said goodbye to an old friend, and like Arnie before him, Steve Rogers will be back. Mark my words; we haven’t seen the last of Steve Rogers and this isn’t the last time he wield the shield. He’ll be back… Tim Mass Movement