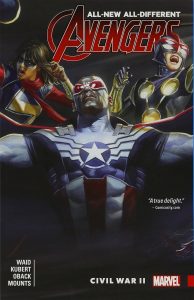 War affects everyone differently. It can turn the brightest and bravest into mindless killing machines, can drive the strongest to panic and make heroes out of those who previously thought themselves cowards.  And when former friends and allies end up fighting on opposing sides of a conflict, then the long term impact on those forced into battle is, more often than not, incalculable. In Civil War II, the All-New, All-Different Avengers begin to question their role in the second superhero war, their motives, what has brought them to this point and how they can find a cessation to the violence and some way of peacefully, and amicably, ending the hostilities. Or rather, three members of the team do. See, Civil War II is told via a series of one shots in which, immersed in the enmity, the Vision decides on a course of action that could change the fate of billions, Thor seeks the counsel of the wisest sage she knows and is told the story of similar request made by her predecessor and an answer that led him to venture down a path of frustration and inevitability and the Wasp, her faith in her destiny and future ripped apart by her warring comrades, finds solace in the most obvious and unusual of places and people.

All-New, All-Different Avengers: Civil War II is raw, direct and incredibly personal story-telling at its most acute. The protagonists vent their ire, fears and questions and are in kind are answered by the Universe in a series of tales that explore the problem with trying to see, alter and shape the future, while offering an insight into the psyches of a fraction of the people involved in the battle and how their contrasting degrees of involvement play out, both for them and the world they’re a part of. Waid and Whitley’s writing humanises its subjects, seeing them as people (especially the Vision who, caught in the ultimate dilemma of wanting to be a “real boy” rather than a simulacrum of one, discovers a strange peace when he resigns himself to his course of action) instead of just powers wrapped in meat sacks, clad in garishly coloured costumes, and Adam Kubert’s grandiose and awe-inspiring art perfectly captures the mood of each participants tale in highly detailed glory. While the tone of Civil War II is for the most part, and rightly so given the subject matter, profoundly serious, in an effort to somewhat lighten the mood in its closing moments,  it also includes All-New, All-Different Avengers #1 in which Ms. Marvel becomes engrossed, and all together far too involved, in the world of online superhero fan fiction. Told by a whole host of guest writers and artists, it’s a funny, light-hearted, self-deprecating romp that offers a mix of surreal, odd and (thankfully) old fashioned takes on the lives of masked defenders and caped crusaders that ends with a nudge, a wink and a smile and thoroughly embraces the idea that, at the end of the day, people are just people, regardless of their power set or abilities. Fantastic… Tim Cundle