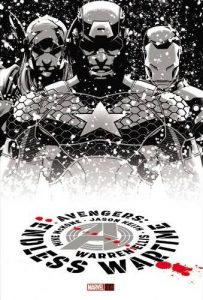 Old soldiers never die and the boldest of warriors become the stuff of legend. Unfortunately, the same is true of their greatest enemies.  They, like the heroes who faced and fought them, also pass into the annals of mythology. This infinite perpetuation of rivalry is one of the ideas upon which the foundation of Endless Wartime is built, and helps to tie together a monster from the birth of Norse lore and experimental Nazi super-weapons forged during the closing days of World War II in Warren Ellis’ slobber-knocker showdown that pits the Avengers against clandestine corporate cybernetically enhanced “dragons” from the beginning of time.  Agile, imaginative and astute, Endless Wartime crams deeply detailed characterisation, smart dialogue and what at first glance would appear to be a relatively straight forward, albeit filled to bursting with action, plot with the precise, sharp and overwhelming art of Mike McKone.

However, as with most things in life first impressions can be deceiving, as Ellis’ story has a depth and texture that it would be all too easy to ignore in favour of concentrating solely on the gung-ho, saving the world from venture capitalist created behemoth’s with frickin’ laser beams on their heads* arc that dominates the book. Endless Wartime is also about a disparate band of “soldiers” who are barely able to function as a team thanks to their “healthy” disdain for each other and who are more than willing to do battle with the forces of “law and order” in order to save the lives of innocents. At times it feels more like a pulp novel Second World War story about a hopeless squad of last chance miscreants sent on a suicide mission than a traditional superhero tale, which fits in nicely with another of its themes. That of Steve Rogers feeling like he never got the closure he needed from his war, and as such has been fighting a never-ending conflict since he was returned to the land of the living from his icy grave. It’s a land that this man out of time is unfamiliar with, uncomfortable in and unsure of. Ellis also muses over the utilisation of super-heroes as weapons of mass destruction via S.H.I.E.L.D.’s almost casual usage of the Hulk and how individual experience in the field of conflict leads men to see the role of the soldier differently, as Wolverine, Thor and Captain America fight the same battle but use vastly divergent methods to “get the job done”.  But most of all, it’s a story about war and duty and how in the end, both become the crucible upon which good men are made and eventually broken.  Semper Fi… Tim Cundle

*Thanks Doc, I owe you one!