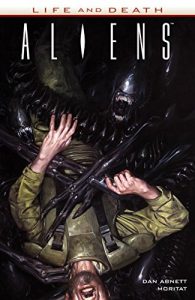 Being a fan of the Alien franchise does have its perks sometimes. One of those is being handed the latest Aliens trade for review. But that doesn’t mean it’s all good though, as Dark Horse have created a very tight world with their Life and Death series that crosses over through Aliens, Predator, Prometheus, and the Aliens versus Predator. I was able to read one of the first chapters in the expansive series last year, so thankfully so I’m not completely lost.

Aliens: Life and Death starts off with the remnants of three fleeing groups of survivors of previous alien encounters slowly being picked off by swarms of Xenomorph’s. After these groups are able to join forces, they are rescued by Colonial Marines. Once safely off planet, they decide to go back in order to rescue Chris, the wife of one of survivors that helped them endure the hell they went through. Chris though is in a world of hell herself as she has been impregnated with the last surviving embryo of the Xenomorph hive on the planet. And just to add to her difficulties, the embryo she is carrying is a queen. Oh, and while all is this is happening, an Engineer is stalking the world and attempting to erradicate all of the life on it.

While I can’t say I knew about all the disparate plot threads at the start of the book, writer Dan Abnett designed his story be read at a breakneck pace that never slows down. While there wasn’t any overt or obvious character development, this is the third part of the extended four part Life and Death storyline and not taking anything away from the story, which is incredibly well written, it might help to read the previous chapters first. The art, courtesy of Moritat (Justin Norman), helps the pace of the plot and the story flow, but there are moments when it seems to slip a little, especially when there is a heavy alien presence on the page. Besides these slights, the third part of this much larger Life and Death storyline was, and is, fun in a ‘B’ movie kind of way, where the plot is secondary to the action. Jason Bonton