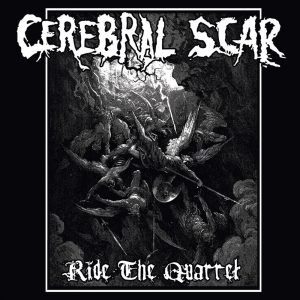 Listen carefully. Can you hear that distant rumble and that low, almost imperceptible howl?  That’s the sound of Cerebral Scar, the delinquent, half-crazed thrash crew tearing the Gates of Hell apart, as having mastered the blackest of metallic arts at the forge of Satan himself, they begin their return to the world from whence they came. In pretty much the same way Abaddon did in the Dark Avenger. Minus the fiery steed and the Sword of Vengeance, although given how angry, driven and focussed vocalist Mark sounds on this new three song EP of Hatebreed colliding with Scream Bloody Gore era Death and Sepultura circa Morbid Visions and Schizophrenia (you know before they went all wanky, became fixated on down-tuning and started hanging out in the Rainforest  and doing shit loads of peyote) crossover beat-down brutality, it wouldn’t surprise me if he did want to chop a few people’s heads off. With a blunt, rusty, letter opener. Thrash heals and pits dig scars. It’s time to get cerebral… Tim Cundle