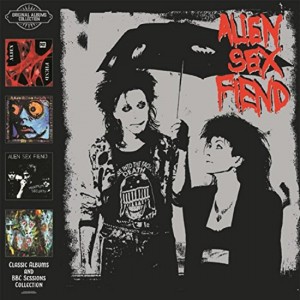 Alien Sex Fiend – Classic Albums & BBC Sessions Collection 4CD (Cherry Red)
“Does what it says on the tin” collection from one of the originators of Post Punk-Electro Goth. Comprising of the bands ‘Who’s Been Sleeping In My Brain’ album from 1983, 1984’s ‘Acid Bath’, 1985’S ‘Maximum Security’ and the ‘It’ album from 1986 along with a veritable feast of bonus single and BBC session tracks. An eccentric and eclectic duo Mr & Mrs Fiend – this collection highlights the bands experimental and boundary pushing music and visuals. Part dark electronica, part Goth, part Psychobilly , it’s far from commercial and probably quite off putting for the uninitiated; however fans of Goth and PVC clothing will probably enjoy checking out one of the more unique pioneers of the genre. Boxed set with a reasonable set of liner notes, but not really essential unless you’re a collector or inquisitive about the origins of Goth. Ian Pickens