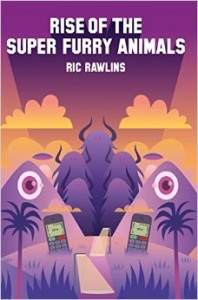 Rise of the Super Furry Animals – Ric Rawlins (Harper Collins)
An engaging, fast paced and fun account of the incarnation of one of Wales most successful, innovative and subversive bands. Rawlins eschews the traditional narrative/anecdotal biography styles, and instead presents the rise of the band from their Bethesda roots in the Welsh language music scene to the heights of their International infamy, in the style of a film script.

There’s lots of inventive writing going on, and no doubt a touch of hyperbole and imagination to the proceedings. Rawlins regales the reader with tales of Tanks fitted with Techno Sound Systems, Columbian Marxist Paramilitaries, 50ft inflatable monsters, Yeti suits, an obsession with mobile phone technology and a desire to spread the gospel of music as a global form of communication; some of which may have been slightly lost in English translation from the bands self-confessed ‘cracked youthful version of the Welsh language’, but which nonetheless perfectly captures the bands sense of the absurd and the surreal.

Written with the bands input and blessing, along with contributions from Creation Records honcho Alan McGee, and original art by long-time collaborator/cover artist Pete Fowler, this is as enjoyable as a music biography gets. Despite not being a fan of SFA during their nineties heyday (too busy being a punk elitist) I thoroughly enjoyed reading Rawlin’s energetic and humorous take on these Welsh mavericks; hell it’s even inspired me to check out the band’s discography with a deservedly open mind. You can’t ask more than that from a music biography. Ian Pickens