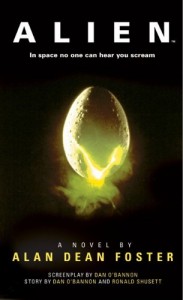 Alien – Alan Dean Foster (Titan Books) (Originally published in 1979, Republished 2014)
Alan Dean Foster has been a prolific author and one of my favourites for near on twenty years; his ‘Spellsinger’ series saw me through high school with his weed smoking, universe jumping, animal talking sorcerer and he has written numerous detailed and loyal film adaptations in his time. This brings us to, possibly, one of his most famous film adaptations to date: ALIEN.

It’s hard to believe that it’s been thirty-five/thirty-six years since the first ALIEN film graced and terrorised our cinemas and it is still synonymous with horror to this day. Seeing this very ‘human’ crew hunted by a near-perfect predator in the confines of the Nostromo still gets my pulse racing even though I’ve seen it umpteen times. The film started a great trend of horror/sci-fi which would lead to two fantastic sequels (Resurrection never happened in my opinion and the ALIEN vs. Predators are, for the most part, not worth mentioning either) and films such as the fantastic Event Horizon would not have been possible without this first iteration of the genre. So why review this book now, thirty-six years after its publication date? Well that would be because this series is coming back and, in my humble opinion, it is going to be done right. Neil Blomkamp (Director of District 9, Elysium, Chappie etc.) will be taking the helm and taking it back to its roots and, with the polarising Prometheus still relatively fresh in our minds, I couldn’t be more excited than if I got to ride in the big yellow power loader myself.

Back to the book. The novel is a slower burner, much like the film, and has fantastic character depth from the offset. The characters are brilliantly brought to life which is helped by having the film to template these characters from in our imaginations. The difficulties of coming round from cryo sleep and the distorting effect of a rough landing on an alien world are described in meticulous detail with enough technical jargon thrown in to add to the realism. That’s the thing about ALIEN, even though it’s this fantastical piece of science fiction it feels very real, the characters, setting and even the alien feel real and plausible which only adds to the intensity of the tension that runs through this story.

If you’re expecting a novel like most modern science fiction releases then you might be disappointed. As mentioned earlier, it’s a slow burner, you don’t meet the first form of the alien until about one hundred and twenty pages in and you don’t meet it in its most ‘fun’ form until about the two hundred page mark of this two hundred and eighty two page story. Even with this said, the story still grips you, if not for the setting then for the character interactions which are as tense as the alien hunts later in the novel. Ash, the resident science officer, seems to be the legendary Ripley’s antagonist for the story and his mysterious addition to the crew her bug-bear. Dallas, the captain, and the rest of the supporting cast are developed individually with their own unique personalities that makes them feel less like filler and more like fully fledged characters themselves (which fans of them in the film will appreciate immensely). As expected though, the alien itself and Ripley are the two characters that steal the show. Ripley’s paranoia and clashing personality make her an appealing yet flawed protagonist and the alien (which I wish had a little more book time) is suitably monstrous and animalistic to instil fear and dread into the reader when close.

This is a film adaptation however and because of this it does suffer. Familiarity with the film and plot does ruin the mysteries of certain characters and the core plotline running throughout the novel. What would have got a ‘No Way!’ bellowed at the TV screen of a person watching it for the first time is somewhat watered down in the novel itself and the ending seems rushed compared to the slow build-up of the rest of the novel.

For fans and completionists of the ALIEN series this is a must read if not to relive the story from a more intimate view then to tide you over until more news on the new films are available. For those who are new to the series and don’t think their tickers will take the horror of the film, this book is a great entryway into the ALIEN universe and a very well written book to boot. Kyle Olsen