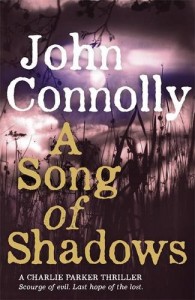 A Song of Shadows is the thirteenth novel in the Charlie Parker series written by John Connolly, and the detective has also turned up in a novella in the author’s collection, Nocturnes. In the last volume in the series, A Wolf in Winter, Parker was left grievously wounded after an attack at his home. A Song of Shadows begins with Parker recuperating in a rented home by the sea in the remote town of Boreas, Maine. A widow, Ruth Winter, and her daughter, Amanda, are renting the only other house in the bay, a stone’s throw away from Parker; and are hiding something.
Then a body is found washed up on the beach, and Parker finds himself in the middle of an investigation that leads to the uncovering of a group of Nazi war criminals who have been hiding in the US since WWII, and the lengths they are prepared to go to in order to ensure they are not discovered. He is helped along the way, as always, by his friends Angel and Louis, among others.
If you haven’t yet encountered the Parker books, then A Song of Shadows isn’t a bad place to start; strands that have woven through previous novels are moved very much to the forefront here, to be developed further. Parker’s dead daughter seeks to warn her father of the dangers he is facing, and when his living daughter comes to visit him at his seaside home, she displays an aspect of her nature that hasn’t been seen up till now in an effort to protect Parker.
It seems that everyone in this novel has a secret, and some will go to almost any length to protect that secret – leading the reader to wonder at times whether there is a single character that is wholly innocent. Lies beget lies, and secrets beget secrets, and hypocrisy is very much the rule of the day.
As usual, the author sets up as much of a mystery as he solves, and the finale of the novel lays the groundwork for various possibilities that Parker will no doubt have to deal with in future novels. Connolly’s language is both beautiful and evocative, leading the reader’s emotions on a ride he has planned with precision and a great deal of skill. Marie O’Regan