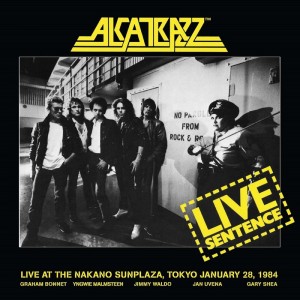 Following his success in Rainbow and MSG, Graham Bonnet went on to form this musical tour de force. With Alcatrazz he catapulted his charismatic vocal resonance to the fore, cementing his position as a premier league singer. ‘Live Sentence’ is taken from the bands first Japanese tour that followed the release of 1983 debut ‘No Parole From Rock ‘n’ Roll’ (also recently re-issued on HNE), and recorded entirely at Tokyo’s Nakano Sun Plaza on 28th January 1984. Although a relatively fresh faced band at the time, this highlights the professionalism and precision with which they executed their 80s infused heavy rock. Featuring the fancy fret-work of the comparatively young Yngwie Malmsteen, the sixteen song set features the likes of ‘Hiroshima Mon Amour’ and ‘Island In The Sun’. Received well by the audience, the live sound and feel is fantastic throughout. Album opener ‘Too Young To Die, To Drunk To Live’ delivers a fierce entrance and sets the pace nicely. As expected ‘Since You Been Gone’ and ‘All Night Long’ make cherished appearances during the rousing set, extra padding that was needed with only one album in tow…  And quite honestly would you forgive Bonnet if he left those out of the set? The DVD adds a pleasant depth to the recordings, with a real ambience of 80’s rock aura – Bonnet’s visual show as he really works the band as a team, although Malmsteen shines; making the stage his own and pushing his guitar work to the maximum. It’s no wonder the young Swede moved on to become what he did. With it being a track for track mirror of ‘No Parole..’, the performance is a collection of simple camera shots, without mindless / confusing multi-camera spin offs, which captures the true spirit of the show. With the focus on Bonnet and Malmsteen, as you’d expect, and an abundance of dry ice and showmanship it’s no surprise that the band work the crowd (especially during above mentioned songs) so well. HNE have excelled themselves and have done Alcatrazz, and their fans, proud… Mark Freebase