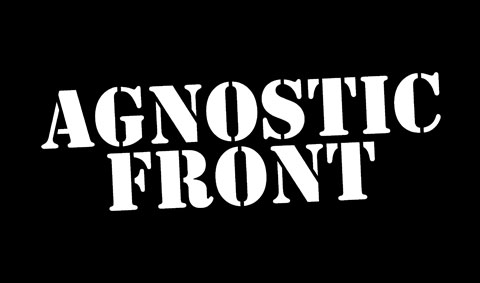 With what is easily one of the finest Agnostic Front albums ever made, due to be released today, bassist Mike Gallo took a bit of time to fill us in with some details…
Words: Mark Freebase

With ‘The American Dream Died’ it seems like the band is well and truly firing on all five cylinders Mike, why would you say I’d get this impression?
Mike: I believe this new record is the most intense one we’ve done in a long time. I feel like this machine gets stronger with age, we’re like a fine wine! I feel we have more fire and ice now than we have had in a long time. With the back up of a new record we’re ready to hit the road again and tear it up.

So another new band member… what’s the score there?
Mike: Well last year Joe decided to move on and we had to find someone to replace him, which was not an easy job. We did try a few guys but nothing seemed right. Roger spoke to a friend of his that recommended Craig Silverman. He saw him play with Slapshot and thought he was a great guitar player. He was very interested in joining the band so we wore him down and got him to try it out. I knew from the first song he played with us that he was the right guy.  Craig is a veteran in the scene and has played in Blood For Blood, Ramallah, Slapshot and Only Living Witness.

To me personally, I think the new album re-captures the spirit, the raw energy of ‘Cause For Alarm’ and ‘Liberty And Justice For…’ would you say that’s a fair comment?
Mike: Yes, some songs definitely have influence from those albums, but I personally believe it’s more like ‘Victim In Pain’ and ‘United Blood’. This record is so diverse I feel it has a little bit of everything we’ve done throughout our career. I think it’s a great representation of what the band has done in the past 30 years. But yet this album still has a unique feel to it.

Would you say there are many of the older fans of AF around still, people from the early era of the true NYHC ‘scene’ or has the band made a totally different connection over the years?
Mike: I think it’s a good mix of old and new. I always see new faces and it’s good to always see some of our old friends and fans that still support us after all these years. We’re blessed to be able to play all over the world and see all the good people that come out to see us, because without them we would not be able to do this.

So what inspired the songs, the topics you have covered on this release, it seems a way more straight ahead approach once again.
Mike: We decided to speak out against what’s wrong today in this country. We want to make people aware of what’s going on, and to bring to their attention that we’re a nation on fire. That something has to change or there will eventually be another world war. We have always been a pro American band and we’re proud of where we come from but we don’t like the people who are running this country to the ground. Love the country… hate our government! 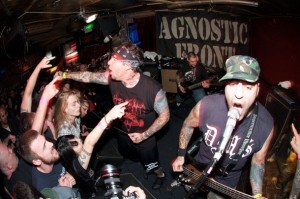 What inspired the collaborations from the guest vocalists? Who’s idea was it, and how easy was it to get them on the album? Also why those particular people?
Mike: We had a song called ‘Never Walk Alone’ and Roger came up with the idea in the studio that if we can get Freddy from Madball, Toby from H2O and Lou from Sick Of It All to sing on it… well… that would bring a great dynamic to the song. It made perfect sense because the lyrics were about unity in the scene. We have a lot of respect for these guys and their bands because they keep giving back to the scene, and putting out records to keep the NYHC legacy alive. We contacted all the guys and Toby was able to come down to the studio where we recorded with Paul Miner (at BuzzBomb Sound Labs in Orange County California).  Freddy and Lou had to do their parts at studios that they were close to… where they were at the point in time. It was great that all these guys took their time out to do that for us and really help create a classic new Agnostic Front song.

What is the activity like these days downtown NYC? I keep hearing people say “this is not like the old New York”…
Mike: Every now and then there will be a hard-core show but for the most part shows are happening in Brooklyn more these days. The city has been overrun by money and yuppies so not that many people hang out down here anymore. New York has a different vibe to it because the people that live here now are not real New Yorkers they’re transplants from everywhere else all over the world. They’re killing the culture and pulling the creativity out of it. 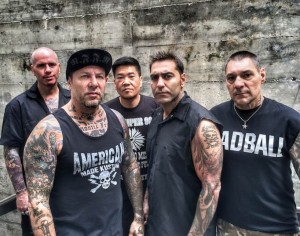 So the music itself… is there a healthy and active NYHC scene?
Mike: There are still shows every week usually like I said, mostly there in Brooklyn but there’s always a show to go to whether it’s a punk hard-core metal Oi show etc… there’s still a driving scene here in New York I don’t believe it will ever die. It just seems to be a little bit more small-scale these days. It always comes in waves.

Moving onto yourself, you replaced Rob Kabula, how did that feel? Have you settled into the AF fold nicely now?
Mike: Rob Kabula was the one who approached me to replace him in the band. He’s a great guy I love him for giving me the opportunity to continue his legacy. He still comes out to see us play all the time and we will still remain friends. I’ve been with Agnostic Front for 14 years now. I’m the longest running member except Vinny and Roger. I will be with these guys till the end there’s no doubt about that!

So, tell us more about the ‘audition’, or was it cut n dried?
Mike: Well like I said Rob was actually the one who got me to join the band. I met these guys along time ago and we were always friends. I guess they thought I was a good fit so they asked me to audition for the band. It was with one other guy and I won’t mention his name. We both played a few songs then the drummer at the time, Jimmy Colletti, asked me to come outside and get some beers with him. I thought he was going to say you’re a nice guy but I’m going to go with the other dude. But that was not the case; soon as we walked outside the door he says you’re our guy. The rest is history from there…

Is AF a band camaraderie or does Roger and Vinny run the show?
Mike: I have to say that Roger is the driving force of this band. He takes care of most of the business and the decisions that we make. We are all team players and we all play our own part to keep this machine running. All the guys do what ever we have to do and contribute collectively as a band.

Many thanks for your time Mike.
Mike:Thank you…

‘The American Dream Died’ is out today on Nuclear Blast Records.