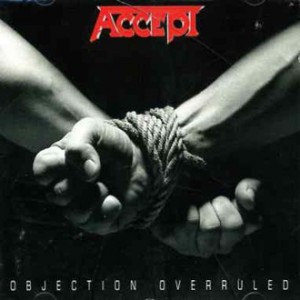 Accept – Objection Overruled CD (HNE/Cherry Red)
The re-union album with Udo back on vocals; originally issued in 1993 and as good as David Reece’s hair metal extravaganza was, this return to true Accept metal was a very welcomed revival. The unmistakable rasp of Dirkschneider’s authority, the commanding deliverance that complimented the now finely tuned band of four, it was what the fans really wanted. ‘Objection Overruled’ is a solid return to grace, eleven finely tuned cuts of metal incorporating their trade mark speed – prominent mostly during album opener and title track, along with the frantic ‘Sick, Dirty And Mean’, through to banging metallic anthems ‘Protectors Of Terror’ and ‘Bulletproof’. It’s as if the fire of ‘Balls To The Wall’ and ‘Metal Heart’ are still burning very strong here. Lengthy liner notes and some old school illustrations (as with all HNE re-releases) positively bolsters the appeal and leaves the point looming that if you already have the original vinyl… then this is a great purchase for the car! Motorhead are often given all the credit for inciting the thrash metal movement, but German metallers Accept played a very large part also. Trad-metal heads and speed freaks should check out one of the innovators. Mark Freebase