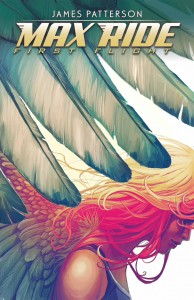 This April, international best-selling author, James Patterson teams with Marvel bring his hit young-adult sensation Maximum Ride to the world of comics as only Marvel could! But first, Marvel is pleased to present your first look inside the debut issue, JAMES PATTERSON’S MAX RIDE: FIRST FLIGHT #1!

“At Marvel we’re always looking to create bold stories that push expectation and attract new audiences into the world of comics – and that’s what we plan to do with Max Ride,” says Marvel Director of Content & Character Development & Max Ride: First Flight Editor Sana Amanat. “It’s the familiar world of Maximum Ride told through the thrilling Marvel narrative. We’re taking a heart-pounding adventure and giving it an extra shot of adrenaline.”

Perfect for new and long-time fans, readers will experience the world of Maximum Ride like never before as the rich, vibrant world of James Patterson comes to life in a whole new way!

Follow the soaring adventures of teenage girl Max and the “flock” – Fang, Iggy, Nudge, Gasman and Angel. They’re a group of ordinary teenagekids – only they are part human and part avian! The product of genetic tampering that has given them extraordinary abilities, these six teens lives quickly morph into a living nightmare as they try to escape their creators and defend themselves from the deadly ”Erasers”. As Max uncovers the truth about her origins, she’ll discover her true calling – saving the world!

A whole new adventure is about to take flight. Be there as this fantastic world soars off the page in JAMES PATTERSON’S MAX RIDE: FIRST FLIGHT #1 – coming to comic shops and digital devices on April 8th!