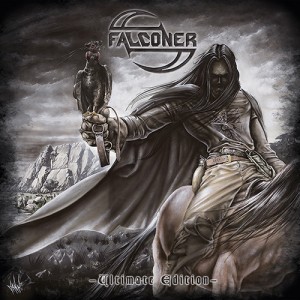 Swedish Folk Metal pioneers FALCONER have announced the re-issue of their legendary debut album as an “Ultimate Edition” on the 17th of April!

The “Ultimate Edition” comes as a 2-CD-Digibook with a bonus-CD featuring seven previously unreleased songs. All songs of the debut album as well as the demo songs on disc 2 have been remastered in February 2015 by Andy LaRocque for a perfect listening experience. The album will also be released on vinyl for the first time ever!

Listen to the remastered version of “Mindtraveller” at www.metalblade.com/falconer. Make also sure to check out the pre-order options, there is also a bundle with an exclusive shirt available!

Comments guitarist Stefan Weinerhall: “Re-releasing our debut album in a remastered version is a great kind of interlude while we do our last gigs as a live band. On top of that we offer our fans to finally hear the demo we did back in 1999, something very few people have heard. We also decided to re-record 3 songs from the debut in acoustic, very scaled down versions. It really got the songs to shine in a new kind of way. So about 35 minutes of unheard Falconer music in both exclusive CD and vinyl versions!”

Track listing “Falconer – Ultimate Edition” disc 1:
01 Upon The Grave Of Guilt
02 Heresy In Disguise
03 Wings Of Serenity
04 A Quest For The Crown
05 Mindtraveller
06 Entering Eternity
07 Royal Galley
08 Substitutional World
09 Lord Of The Blacksmiths
10 The Past Still Lives On
11 Per Tyrssons Döttrar I Vänge