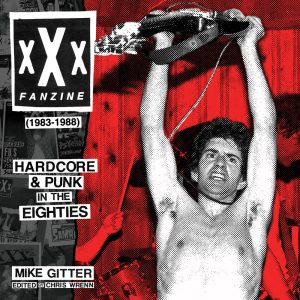 For some reason, I thought it would be smaller. Don’t ask me why, I don’t know, I just thought this book wouldn’t be…Well, as big as it is. Truth be told, it’s massive. Absolutely huge. It weighs as much as a small moon, could be used to block out the sun and not a single millimetre of its voluminous space is wasted. Every inch of every page is crammed to bursting with interviews (new and old), asides, reviews, cartoon strips and more and at first glance, it’s a little overwhelming.   Don’t get me wrong, I don’t mean that in a bad way, just the opposite in fact. See, if you were stupid enough to imagine, like I mistakenly did, that you’d be able to read xXx Fanzine (1983-1988)in a single afternoon /evening / day or sitting then you need to check your brain at the door, apologise to yourself and Gitter and demand a replacement for your defective thinking organ. This isn’t just a book, it’s the eighties Hardcore equivalent of the Encyclopaedia Britannica. It is the be all and the end all of mid-eighties US Hardcore forever and ever, amen.