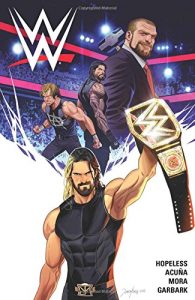 Two of the great loves of my life, professional wrestling and comics, wrapped up in a single package? And written by Dennis Hopeless, one of my four colour gurus of choice? How in the name of ECW have I not heard about, or read this book until now? Well, I guess it’s better to arrive at the party late than not make it all. So even though how WWE slipped under my radar is a Scooby Doo sized mystery with no answer in sight and with no obvious, masked ne’er do well lurking and pulling levers behind a velvet curtain with the words “Nothing to see here” painted on it in six foot high day-glo letters to take the blame, I guess I’m going to have to put it down to bad luck and the fact that fate hates me. That said, now that Redesign… has been released, it gives me a chance to begin to play catch up with Hopeless’ stories of the square circle.

Is Redesign, given the way I feel about the medium being used to tell the tales of the sport of Kings that I adore and the high esteem in which I hold the author, everything that I hoped it would be when it first arrived? Oh yes. Yes it is. And so much more.  Diving headlong into, and assuming that reader has at least a passing familiarity with (because after all, Wrestling fans are this books target audience), relatively current WWE storylines, this initial volume of the book focuses on the Shield’s (a wrestling faction composed of Dean Ambrose, Roman Reigns and Seth Rollins) initial fall and how one of its members, Seth Rollins, betrayed his brothers in arms in order to pursue his dream of becoming the greatest champion of all-time regardless of the personal cost to him or those closest to him. Combining on-air and actual WWE storylines with a wonderfully detailed and inventive behind the “scenes” plot that sprung straight from the imagination its writer, Redesign… nails every aspect of Wrestling business, adds a ton of pizazz, amplifies everything by a factor of ten and turns the colour commentary and Jim Ross-O-Meter that charts Rollins rise, fall and rebirth up to eleven before snapping the dial off and just let everything gallop to its riveting conclusion.

It’s obvious that Dennis Hopeless is a wrestling mark. His enthusiasm for the subject matter is writ large in every panel. It’s in the vivid characterisation that perfectly captures the essence of the major and minor players involved in the WWE, the subtle nods and references to the history of the business that litter the books pages and in the uncanny way that he manages to get underneath and inside the skin of Seth Rollins to tell a story that’ll hook every Wrestling fan, big or small, from the first chair shot to the final pedigree. Tagging with heavyweights Dan Mora and Serg Acuna who both deliver a stunning series of artistic finishing moves throughout Redesign , Hopeless has formed a creative stable whose impact , on the strength of this first WWE chapter, will be felt for ages to come.  Dennis Hopeless just laid the smack down on all of our candy asses…  Tim Cundle