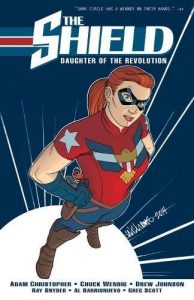 Considering the nature of war and what they were ultimately created to do, comic based super-soldier mythology has always been somewhat tame and sugar coated. Don’t get me wrong, I’m a massive fan of the concept and its execution, it’s just that sometimes, with everything that a solider in their position would inevitably be asked to do for their country, their origins and exploits in times of conflict, can seem little vanilla. Or, more accurately they did until The Shield was reimagined for a twenty first century audience. Born, almost literally, on the battlefield of the American Revolution, The Shield refuses to bow to convention, cater to stereotypes or tip its hat to previous canon, and is a brutal, uncompromising exploration of the idea of a warrior with super-powers that tears up the costumes and capes rule book and starts again.

Eschewing the traditional approach of the “good” guys utilising technology to build a solider to shorten the horrors of war in clinically clean laboratories; The Shield  a soldier reborn throughout the ages when her country needs her most, was created to fight, kill and inflict maximum damage on the enemy and to keep going until nothing is left standing in her way. Forged by science and magic in the blood soaked dirt of a brutal guerrilla struggle, Daughter of the Revolution is the story of her digital age incarnation, the modern warrior brought into the world to finally fulfil a two hundred and fifty year plan which she has been, unbeknownst to her, instrumental in creating.

Used as tool for intelligence gathering and murky espionage while fighting to understand her place in the world and realise who the good guys actually are The Shield becomes a weapon that’s used to bring the world to the brink of nuclear annihilation. Told via a mixture of flashback and full throttle action, The Shield is a plot heavy thriller that incorporates political upheaval, treachery, global instability and a little of the mystical and extra-terrestrial.  Adam Christopher and Chuck Wendig completely rewrite the concept of the super-soldier while the artwork of Johnson, Snyder, Barrioneuvo and Scott gives the story a gritty, noir tinged, realistic feel that makes it pop off the pages and straight into your subconscious. It’s dark, it’s deadly, its equal parts Watchmen era Alan Moore and Dashiel Hammet and it’s unlike any superhero story you’ve ever read. And it is absolutely brilliant…  Tim Cundle