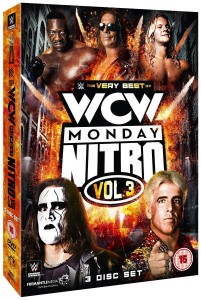 WWE: The Very Best of WCW Monday Nitro Volume 3 (WWE DVD)
The Volume 3 of any “Very Best” collection is an inherent admission that this is not the very best.  Instead, it is a statement that the true “best” was included on Volume 1, then the also-rans which are pretty good but not necessarily “very best” were put onto Volume 2.  Volume 3 is the remainders section, and nowhere is this rule of thumb I have regarding volumes more apparent than it is here on The Very Best of WCW Monday Nitro Volume 3.
Don’t get me wrong — if you love watching Lex Luger and Diamond Dallas Page matches then this really might be the “best” for you (there’s 10 DDP matches across the three discs, plus his interminable interstitial segments in which he darts about from sincere honesty to glaringly dishonest kayfabe, sometimes in the same sentence).  And obviously it’s always nice to hear the NWO’s theme music a hundred times.  But no “Very Best” collection would include yawn-inducing promos such as The Giant getting kicked out of the NWO (who cares?), the NWO trying to recruit Rick Steiner into their ranks, the popcorn fart that is The Giant throwing Scott Hall into a swimming pool (and Kevin Nash jumping in after him), and the seemingly never-ending bore-fest that is the Buff Bagwell led “takeover” of WCW Nitro by the NWO (a must if you love to watch ring-crew furiously wield electric screwdrivers!)  By the time you reach Disc 3 you can’t help but feel you’re having your intelligence insulted.  Indeed, the only reason I can muster for this collection existing is some hidden clause in the ubiquitous WWE “legends” contracts they offer old talents that ensures a regular royalty paycheque.  Sting has recently joined the company, so features prominently throughout.  Bret Hart is also well represented despite (by his own admission) his WCW tenure being notably non-noteworthy.
It’s not all bad — as always, the WCW cruiserweights earn their money with decent matches between Chris Jericho and Juventud Guerrera, Juvi and Kidman, and an all-star tag match pitting Eddie Guerrero and Chris Jericho against Eddie’s nephew, Chavo and current WWE-agent, Dean Malenko.  But even these glimpses of light are truncated television matches that don’t last long enough and aren’t as good as the cruiserweight matches found on Volume 1 or even Volume 2.
Finally, we must address the elephant in the room that is the NWO.  I wasn’t joking about their incessant music — practically every match on the three disc set has some NWO component as the faction spirals out of control and splinters off into its various confusing factions.  As the set reaches its conclusion it is hard to believe there were any storylines going on in WCW that weren’t NWO-related, and even harder to believe that anyone in the company, or the original TV audience, could follow the storylines that were.
If lousy ads for DDP-yoga masquerading as “insights” and underwhelming television matches trading on star-power to hide the fact that nothing of import actually happens are your thing, then go for it.  But there are better collections of WCW matches to watch than this.  Dan McKee