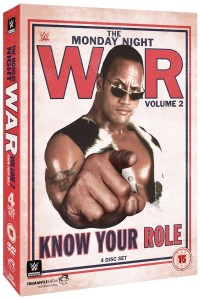 WWE: The Monday Night War Vol 2: Know Your Role (WWE DVD)
After the sheer awesomeness of the first volume of this fantastic WWE Network show, I was excited to see the final ten episodes.  Unfortunately, despite some fantastic episodes amongst the ten, this second set does not have the same level of consistency as the first, with some of the later episodes veering into redundancy that almost, almost, teetered on dull.
The basic problem is there are about six great episodes here and four that did not need to be made.  This is a problem because, at an hour in length each episode, even the great episodes are also at this stage covering old ground in places, so the four duds feel mind-numbing.  A general issue is that WWE treat us like idiots in each episode: for example, by episode 14 in a documentary series only a hardened wrestling fan is ever going to watch (and who, importantly, has already watched the previous 13 episodes) do we really need to be reminded that throughout the nineteen-nineties WWE and WCW were at war?  Do we need the same footage of the NWO singing “we are the champions” at the announce desk?  The same footage of Ted Turner explaining that he wanted to beat WWE?  The same stories about Hall and Nash’s shocking defection?  The same tired re-telling of the things that backfired (such as announcing Mick Foley’s title win on Nitro, or focusing on old stars while not developing new ones)?
At a tight 30 minutes, some of these later episodes would have packed a punch, but the level of repetition after already covering much important ground in Volume 1, made part of this volume a chore.
The good episodes offer something new: the focus on the role of ECW, for example, gives much deserved credit to the renegade Philadelphia promotion’s place in the Monday Night Wars in developing new stars and focusing more on adult content than the formerly family friendly wrestling storylines of the day.  If the Monday Night Wars led to the creation of WWE “Attitude”, which became the most profitable “golden period” in wrestling history, and WWE “Attitude” is essentially a sanitized version of Paul Heyman’s ECW for the mass markets, then ECW’s place in this history is crucial for truly understanding it.  Even better, this episode includes footage of the memorable series of Raw episodes before ECW’s first pay-per-view where Jerry Lawler invited the company to Monday Nights, giving international audiences the first glimpses of RVD, Sabu, Taz, the Dudley Boys and an assortment of other ECW originals.
Similarly, the Divas episode shows the integral role women played in the Monday Night Wars — a fact belied sadly by their omission from most of the other episodes!  As the clear impact of women across WWE during that time was laid bare, it was hard to take the narrative seriously when their role had been so side-lined across the rest of the series.
Key individuals who played their part in WWE’s ultimate victory in the war are also given deserving profiles in this context: Chris Jericho’s episode is a fascinating look at how an underutilized talent can, given the right atmosphere, completely turn things around and become a main event player.  Likewise, the Rock’s episode is a study in perseverance, as we watch his doomed debut as the plucky third generation “Rocky Maivia”, see the crowds throw scorn and apathy towards him, only to watch him evolve into the most electrifying man in sports and entertainment today.
Finally, the last episode is a refreshingly honest look at the WWE’s failure in correctly booking and marketing the WCW/WWE “invasion” angle, exposing it as a dud that slightly soured the victory of Vince McMahon buying the competition.  Seeing how WWE incorporated the best bits of WCW into its programming, and how the star talents of WCW eventually found their way to a WWE ring, is a nice coda to such a brutal multi-year battle for each company’s survival (indeed, it fits with the hypothesis of Bad Religion singer. Greg Graffin’s new book “Population Wars” that war needs to be about coexistence rather than elimination, ultimately, if we are to survive.  WWE would not be what it is today without its war with WCW, but also without eventually collaborating with that enemy and coexisting with its survivors.)
However, the four episodes between the Divas episode and the Fall of WCW episodes are merely treading water, showing us how celebrities were utilized on both sides, how certain well documented mistakes were made, and in some cases just randomly reminding us of certain storylines or wrestlers that occurred during the period.  The Kliq episode is especially dull, because most of it was covered in the early overviews on Volume 1 and there is nothing new here that isn’t covered on The Kliq Rules, a DVD set released at the same time as Monday Night Wars Volume 2.  Furthermore, whereas Volume 1’s post-episodes analysis between HHH and Sting, prompted by Renee Young, provided some interesting insights into the state of mind of these two ey individuals during that time, Volume 2 gives us a cranky Eric Bischoff providing post-episode analysis from the comfort of his own home.  Sadly, Bischoff tells us nothing new, preferring platitudes or hyperbole to insight, and the segments come off as a waste of time — an obstacle before the next episode instead of an important supplement to the main feature.
While Volume 1 of this series was essential viewing, you could quite happily live without seeing half of what is included on Volume 2.  The good episodes are very good, but for a four disc set this really only warranted two discs.  Get it if it’s cheap or on sale, but this is nowhere near as essential as Volume 1.  Dan McKee