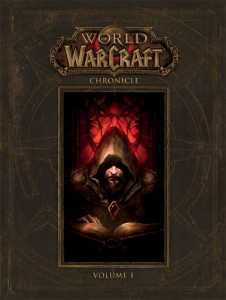 While I’ve never played World Of Warcraft ,as I’ve never been a fan of MMOs, I did play the original Warcraft and loved it. That’s not to say I’m completely lost when it comes to some of the lore of the fictional world in which the game takes place, as a lot of my friends had played, and some still play, the game and one of the funniest stories from their time playing it, was kiting (teleporting) in a certain Doom Lord into Stormwind City.

I’m sure plenty of players have funny stories about the game world, but this book isn’t one of them, as it deals with the past. When I say the past, I mean the formation of Azeroth itself. How dark forces were constantly trying to encroach on its lands and corrupt the soul of the titan that is the very heart of the planet. Of how the Old Gods once inhabited the land but were eventually enslaved. How time after time the remnants of this battle and the races it spawned have fought to either stop, or help, the return of the Burning Legion and the one blight from ancient times that cannot be destroyed. The blight that is the soul of the corrupted titan, Sargeras.

Admittedly, it can be a lot to take in at first, but as the story progresses, it becomes a lot more coherent. A good portion of the book helps explain how each of the lands of Azeroth developed their own legends and hierarchy. How when at the height of prosperity, the need for more always toppled an empire whether it was Orc, Night Elf, Dwarf, or Pandaren.

I should also mention this book is coming out at a pretty good time, as it should coincide with the imminent release of the film Warcraft. The end of the book also deals with the birth and awaking of the power within Medivh and the opening of the Dark Portal, both of which will play a key role in the film. For those of you that enjoy learning everything they can about an always changing, living world, this volume is indispensable, for the sheer amount of history it contains, if nothing else. And as if that wasn’t enough, it’s also an incredibly compelling read. What more could you want?  Jason Bonton