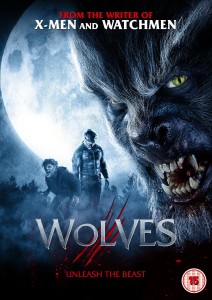 Wolves (Altitude Film Entertainment)
Recently, on more than a few occasions, I’ve found myself despairing about the shiny, shimmering, twinkling morass of tedium that the heavyweight monsters of horror cinema have found themselves plunged into by the seemingly never-ending series of ‘Twilight’ inspired films and television shows. It’s been a tough old time for us old school horror fans, as our creatures of the night have been transformed from ripping; rending, frenzied supernatural fiends into self-loathing, sentimental, love befuddled cuddly critters that every girl wants to take home to meet mum and dad. Honestly, just thinking about it turns my stomach and makes me want to vomit, and if I had any hair, I’d be pulling it out in in frustrated rage. Or at least, I would be if I hadn’t just spent ninety minutes immersed in a glorious ode to the halcyon days of eighties horror flicks and the coming-of-age teenage comedies that John Hughes and his disciples pumped out ad infinitum. That’s right folks, ‘Wolves’ has arrived to declare war on the likes of Stephanie Meyer by cutting the schmaltz and the sugary, syrupy over sentimentalised angst ridden nonsense out of teen creature features; stripping them back to what they once were, and can be again: good old fashioned, tooth and claw, blood, guts and gore splatter filled fests with heart; characters who you actually like no matter how crazy they are ( Jason Momoa’s lunacy filled turn as the bad guy you love to hate is worth watching the film for alone), a plot that you actually get behind and dig that features a couple of welcome, and unexpected, twists and an ending that teases the possibility of more to come.

It’s a simple enough, straight forward story. Boy discovers he’s a werewolf, his parents are murdered, he hits the road to avoid being locked up, makes his way to a secretive, strange town, falls in love with a girl, false foul of feuding clans, discovers the truth about his past and family and sets out to save the day by tearing the local hoodlums apart (quite literally) and restoring balance and order in the process. ‘Wolves’ embraces the tired old werewolf clichés, wraps them around it’s little claw and makes them its own, while twisting and reinventing lycanthrope mythology to deliver a blackly comic love story and human drama that’s about “monsters” rather than people. Although, by the time the credits start rolling, you’ll have difficulty knowing which is which, where the person begins and the monster ends and vice versa. Like all the best monster movies, it also explores a number of undercurrents and themes, namely alienation, isolation, loneliness and the inability to fit into the pre-determined roles fashioned for each of us by society, and like all the very best horror movies, it forsakes computer trickery and digital “magic”, and instead revels in its dependence on, and usage of prosthetics and special effects. Which, you know, just makes the film even cooler, and with a knowing nod or two to John Waters, John Landis and Adrian Lyne thrown in for good measure, ‘Wolves’ has upped the ante and returned the werewolf to the top of the horror cinema food-chain. bHowlingly good fun… Tim Mass Movement