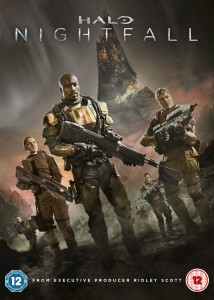 Halo: Nightfall (Anchor Bay (DVD)/ Content Media (digital))
I don’t play video games, and the fact that I still refer to the medium as video games, should give you a pretty good idea of the last time that I actually played one. In fact, the last time I was even vaguely interested in them was when the coin operated ‘Dragon’s Lair’ was the height of technology and I spent an afternoon, and an awful lot of ten pence pieces, trying to unlock its mysteries. I failed miserably, and from that day to this, I haven’t bothered with consoles or handheld sets due to a fear that my humiliating ineptitude, and inability to control the fate of Dirk the Daring was an indicator of my woefull skill at such games, and because, for some unknown reason, the whole computer gaming thing has just passed me by. So, when ‘Nightfall’ arrived, much as I was vaguely aware that it was based on some globally massive franchise, I had no inkling, not even the faintest idea, of what ‘Halo’ was about or what to expect from a film set in the Universe that had grown around, and from, the games phenomenal (so I’ve been told) worldwide success.

Familiarity with the ‘source material’, or rather my lack of it, wasn’t an impediment, and if anything, was actually a boon when it came to ‘Nightfall’, as it meant that I approached the film completely unburdened by expectation and could experience it based solely on its own merits. Set in the twenty sixth century in the aftermath of a war between humanity and the Covenant (whatever they are), ‘Nightfall’ follows a squad of troopers, formed from an elite unit and a squad of colonial militia, on a mission to track and destroy an element, which when weaponised, can be used to destroy human DNA. The problem is, the element exists in only one place, on the surface of a one hundred mile long chunk of the wreckage of the Halo trapped in the close orbit of a star, territory that’s not only forbidden to both humans and Covenant alike, but who’s surface conditions, because if its proximity to its stellar body, resembles the worst medieval visions and nightmare of Hell. It’s a simple snatch and grab mission, get in and get out as quickly as possible, that goes disastrously wrong thanks to a few monstrous surprises, and what was supposed to be a straightforward assignment suddenly transforms in to a desperate race against time and a struggle to stay alive, get the job done and escape from the all crushing embrace of Hades before death comes calling.

‘Nightfall’ is an effects (which look fantastic) heavy, noir flavoured hard science fiction thriller in the same vein as ‘Riddick’, ‘Alien’, ‘Starship Troopers’ and Hitchcock’s ‘Lifeboat’ in which the plot is driven by the grief, desire for vengeance, duty and secrets (both past and present) of its characters, that thrives on personal drama and the relationships that develop and evolve throughout its story, as much as the gritty, grim action that fills it’s running time. It’s fast, furious, involving, surprisingly intelligent and proof positive that you don’t need marquee names and a bank busting budget to make a great Science Fiction film. You just need vision, imagination, a good cast, a good writer and a great director, all of which ‘Nightfall’ has in abundance. Hooah!! Tim Mass Movement