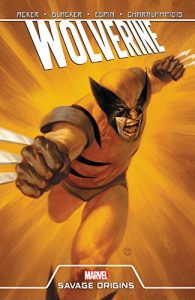 After seeing the title of this book, you’re probably thinking “But I already know this. I’ve read, heard and seen any number of variations of Wolverine’s Weapon X story” and if Savage Origins was a Weapon X history lesson, you’d be right. But it isn’t. So simmer down, relax and take a couple of deep breaths, because no-one is re-writing or attempting to recreate established canon or Wolverine mythology. Savage Origins isn’t about how Logan got adamantiumfied or how he was transformed into a mindless killing machine because we all know how that story inside out. Heck, who doesn’t?  It’s Marvel 101, entry level superhero stuff of legend that any and all self-respecting four colour fans know off by heart. But that isn’t what the two Ben’s story is concerned with, or about.  Instead, in Savage Origins, they focus on the immediate post-Weapon X period of Logan’s life, when he became the first costumed hero “sanctioned” by the Canadian government, learned to become human again and went ten rounds with the Hulk in his first “assignment” for his employer.

Discovered battling the Wendigo in the Canadian wilderness by a couple of honeymooning scientists who just so happen to work for  the same top secret government department that developed the Weapon X programme, in Savage Origins Wolverine is brought back to “civilisation” and given a new purpose by his “saviours”  and benefactors. But like every road that Logan travels, this one isn’t without its bumps, which this time arrive in the shape of an inevitable love triangle, behind the scenes political manoeuvring and power struggles and enough claw based superhero action to keep even the most fervent and demanding of ‘Snikt-Snikt’ slicey dicey fans happy.

Savage Origins rockets along at a frantic pace and doesn’t stop to pause for breath until it’s finished telling the tale of what happened to Logan between two of the most incredibly well documented chapters in his life. The dialogue, characterisation, multi-layered plot and art are all spot on and prove that the Ben’s a are a natural fit with Espin and Smith and whoever put them together on this book should give themselves a well-earned pat on the back and seriously think about teaming them up on a permanent basis.  For Wolverine fans, newbies and veterans alike, Savage Origins is a must read and as an added bonus, it even includes the opening chapter of Millar and Romita Jnr’s Enemy of the State, which is, as everybody knows, one of the greatest Wolverine stories ever told. Sharpen your claws and dive right in… Tim Cundle