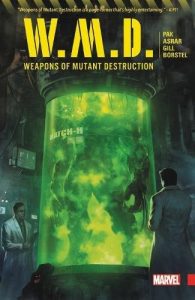 Get set for the return of William Stryker and his Weapon X program as they get set to wipe out every mutant on the face of the planet using their new secret weapons – gamma irradiated, adamantium cyborgs with gene spliced mutant powers. Oh yes.

Standing in the way of his planned racial cleansing are a handful of Weapon X’s previous experiments: Old Man Logan (you know, the guy that used to be Wolverine), Sabretooth, Lady Deathstrike, Warpath and Domino.  Oh yeah, the Hulk’s there too.  Not the Bruce Banner flavoured  Hulk that you may be used to, but the new Totally Awesome Hulk!  A super genius teenager called Amadeus Cho who siphoned off the Hulk’s power and now uses it for himself.  Using nanobots.

So you have the Hulk and a bunch of stabby, murderous mutants versus an army of Hulked up, adamantium cyborgs with mutant powers.  What’s not to love?  And did I mention that those crazy science types at Weapon X have  developed an assortment of killer cyborg animals? Also adamantium, naturally.  You’ll never look at your cat in the same way again.

The odd man out in all this is the Hulk.  Amadeus Cho is decidedly non-murdery and his primary concern is rescuing the poor saps that are being turned into unthinking cyborg warriors rather than killing them.  Obviously this doesn’t sit well with the more ‘kill ’em all’ attitude of the mutant contingent and there’s definite friction in this uneasy alliance.  Can Old Man Logan keep the team together to face down their common foe?  Even when Sabretooth decides it would be fun to blow the Hulk up?  You’ll have to read this to see.

This collection reprints Weapons of Mutant Destruction: Alpha #1, Weapon X #5 – #6 and Totally Awesome Hulk #20 – #22.  It’s an action packed battle fest with a dysfunctional team of heroes and a selection of near indestructible cyborg murder machines.  There’s humour, drama and a clash of ideologies.  It’s also quite refreshing to read a comic that’s this fun and unpretentious.

It’s been a while since I’ve followed the adventure of Marvel’s merry mutants (or the Hulk come to that) but I’m glad I read this.  You will be as well, give it a shot.  Paul Ferriday