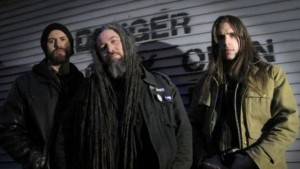 “WIZARD EYE is thrilled to be working with Black Monk Records,” says bassist/vocalist, Dave. “As a Philly-based label whose owners have been fans of ours since day one, we can’t imagine a more ideal partnership for our first release on vinyl. Black Monk Records has empowered us to bring our titanic wizard riffs to the masses in exactly the format they need and with complete artistic integrity.”

The newly formed label, started by the owners of Philadelphia record store, Vinyl Altar, will focus on releases from local artists who share their love for high-quality albums with strong aesthetics.

“WIZARD EYE has been one of our favorite bands from Philly for some time now,” Christopher Mazeika, one half of Vinyl Altar, explains. “When Black Monk Records was ready to put out its first release, it was only natural that we approach WIZARD EYE. Black Monk Records is all about local pride with worldwide appeal, and WIZARD EYE is all that and more!”

The band and its management see this pairing as natural and highly advantageous for all parties involved.

“Just visit Philadelphia’s Vinyl Altar once, and you’ll know the heart that Chris puts into making it one of the best record shops around,” says WIZARD EYE manager, Scott Harrington of 313 INC Artist Management. “It makes sense that his passion would lead him to starting his own label. And that passion is just one of the many reasons we are extremely excited to announce WIZARD EYE‘s partnership with Black Monk Records for this album.”

The nine-track album, Wizard Eye, was recorded in Haddon Heights, New Jersey, at Gradwell House Recording Studio and is slated for mid-Summer release. This collection will be initially made available at a release show to be held at the Vinyl Altar store location, but it will be also be distributed internationally via web and mailorder. Further info to be announced soon.