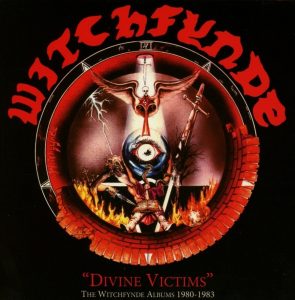 NWOBHM has a handful of highly praised bands, but dig a little deeper than the obvious and you will discover a plethora of extremely decent underdogs. This collection features the first three acclaimed albums from the Derbyshire rockers, plus a batch of bonus cuts.

Debut album Give ‘em Hell (originally released in May 1980) is a little more laid back in approach, but the classic artwork is what will draw many in. Clear production and a balanced output add to the stellar resonance the traditionally English quartet’s glossy guitar riffs.  The high-pitched vocals are never over the top, and are exquisitely executed during Gettin’ Heavy. The sombre title track Give ‘em Hell gives a glimpse of the band’s future direction and carries a dark edge, whilst album closer Pay Now–Love Later gives forth a driving stoner groove which will appeal to scores of rockers. Three bonus 7” tracks bump up the first disc adding a little more value for money.

Disc two is slightly heavier, possibly doomier, and way more metallic in every essence. Stagefright (also 1980) sees the band embrace all things NWOBHM, perhaps a result of touring with the likes of Saxon, Girlschool, and even Motorhead. Again the overall production is clear and well balanced whilst managing to keep the origins of the band’s unique sound. Doing the Right Thing should have been a massive hit, and could have potentially blown the band up big time given the right backing from the music industry… The nine tracks on this second record deliver more drive and dig their heels in deeper than the first, cementing the Witchfynder’s name amongst luminaries of metal. For many older metal heads like myself, it is the inclusion of the four extra tracks transmitted on the classic Friday Night Rock Show recorded 21/1/81 that stand out as timeless gems. Give ‘em Hell, Gettin’ Heavy, Belfast, and Magic Moon sound great, and one could be forgiven for thinking they may have been forever lost. This was Witchfynde at their peak – explosive!

It is with third album, and disc three, Cloak & Dagger that things changed for the group. Vocalist Steve Bridges had left the fold, to be replaced by Luther Beltz (who remains in the re-formed line up to this day); this charged the band with a sharper faster feel, modernising the sound somewhat and tying in with the resonance relevant to its 1983 release. Harder drum rhythms, poignant fretwork submerged it completely in the heavy metal context of the time. The band now aired a feel of Judas Priest, and looked set to blast into the stratosphere at the time; but poor promotion coupled with the record label folding meant the untimely demise of the band. Listening to these eleven tracks will give any heavy metal fan a distinctly positive outlook of what British music was capable of at the time; premier league stuff.

Original sleeve artwork, and an accompanying sixteen page booklet with time relevant photos and a well-documented liner essay make this clamshell box set a definitive purchase for new comers to the genre, or even those looking for vinyl alternatives automobile friendly and accessible. Mark Freebase