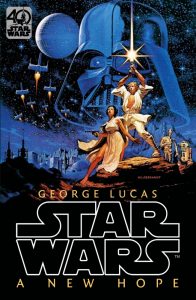 You’ve heard people say that certain books have become their bible, right? Well, between late nineteen seventy seven and early nineteen eighty, this novelisation was my version of the good book and I read and re-read it so many times that it nearly fell to pieces through over-use. Originally released as just Star Wars and re-released and re-branded Star Wars: A New Hope (following in the footsteps of the film’s screen crawl overall for its 1981 cinematic re-release)for the fortieth anniversary of George Lucas’ finest moment, which in case you don’t know is this month, it’s still an engrossing, engaging read. Sure, we all know the story backwards, but as the book is written using the original screenplay rather than the film as its blueprint, it does differ from, quite significantly in places, the tale that we all know so well.

For instance, there’s the scene with Luke and his friends that introduces Biggs and actually makes sense of his later appearance on Yavin 4, and Han’s interaction with Jabba on Tatooine that was later digitally messed with and reintroduced to the special edition of Star Wars and a hundred other interesting little titbits.  Did you know Luke’s original call-sign during the Battle of Yavin was Blue Five, not Red Five and Artoo’s original design involved clawed limbs rather than wheels? Well, you do now and if you decide to once again journey to that galaxy far, far away you’ll discover that and so much more.

However, the book isn’t without its faults. Even though it’s credited to George Lucas, it was actually ghost written by Alan Dean Foster and as talented a writer as he is (he is, and to this day remains in my top twenty authors), even he can’t save this book from some of the truly horrendous dialogue that litters it’s pages. While Lucas is a visionary and an imaginative genius, his talent has never extended to writing dialogue*; he just doesn’t have a “feel” for it and we can all thank whatever makers we believe in that the script doctor who worked on Star Wars fixed most of it before the cameras started rolling. That said, the story zips along and still feels as fresh, exciting and vital as it did the first time of the probably couple of hundred or so others that I lost myself in its pages.  The Force is still strong with this one… Tim Cundle

*Harrison Ford, talking about his dialogue, once told George Lucas “You can type this shit, but you can’t say it”